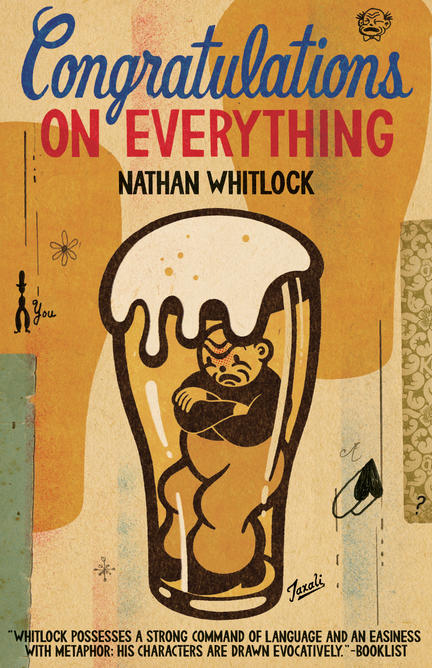 A dark and comic novel, Congratulations On Everything tracks the struggles, frailties, and cruelly pyrrhic victories of the middle-aged owner of a bar-restaurant and a 30ish lunch-shift waitress.

Jeremy has bought into the teachings of an empowerment and success guru, hook, line, and sinker. A Toronto service industry lifer, he’s risen through the ranks until he finally takes the keys to his destiny and opens his own place, The Ice Shack.

Everyone assumes Ice Shack daytime waitress Charlene is innocent and empathetic, but in reality she’s desperately unhappy and looking for a way out of her marriage to her high-school sweetheart. A drunken encounter sends Charlene and her boss careening. The Ice Shack stops being an oasis of sanity and, as Jeremy struggles to keep his business afloat, he’ll stop at nothing to maintain his successful, good guy self-image.

In an era when the gourmand rules and chefs become superstars, Congratulations On Everything is a hilarious and occasionally uncomfortable dose of anti-foodie reality that reveals what goes on when the customers and Instagrammers aren’t around — and even sometimes when they are.

Nathan Whitlock’s award-winning fiction and non-fiction has appeared in the Globe and Mail, Toronto Star, National Post, Toronto Life, Report on Business, Flare, Fashion, Geist, Maisonneuve, and Best Canadian Essays, and he has appeared on radio and television discussing books and culture. Heather O’Neill called A Week of This, Whitlock’s first novel, “a portrait of people in a small town so intimate that it feels like you are under the covers with them.” He is a contributing editor for Quill & Quire. He lives in Toronto with his wife and children.

“Congratulations on Everything is a wonderfully complicated story about small but big ambitions, full of surprising, bittersweet twists. It’ll worm its way into your heart with its beautifully damaged characters and unexpected triumphs over the most hopeless adversities. Expect some great laughs. Do yourself a favour: Get this book!” — Jowita Bydlowska, author of Drunk Mom: A Memoir

“Possibly the most entertaining book ever written about a decent guy committing self-sabotage. Reminds me of Russell Banks at his best.” — Cary Fagan, author of Bird’s Eye and My Life Among the Apes

“Packed with the kind of charmingly odd, broken characters that crowd every decent bar, Whitlock’s fast and funny novel explores lives that may look small from the outside but are vast and infinitely redeemable.” — Katrina Onstad, author of Everybody Has Everything

“A funny, sad guided tour of the private hell that is owning a bar or restaurant. Nathan Whitlock has an ear for authentic dialogue and the constant negotiation and disappointment that is adult life. The best novel I’ve read all year. (Though I could do without so many curse words.)” — Corey Mintz, author of How to Host a Dinner Party

"Whitlock's second novel (after A Week of This) slyly masks immense depth of character and emotion behind wry humor and a simple story about seemingly uncomplicated people . . . Whitlock shows that characters don't need to be flashy to be interesting, just written well." — Publishers Weekly

Other titles by Nathan Whitlock

A Week of This

a novel in seven days