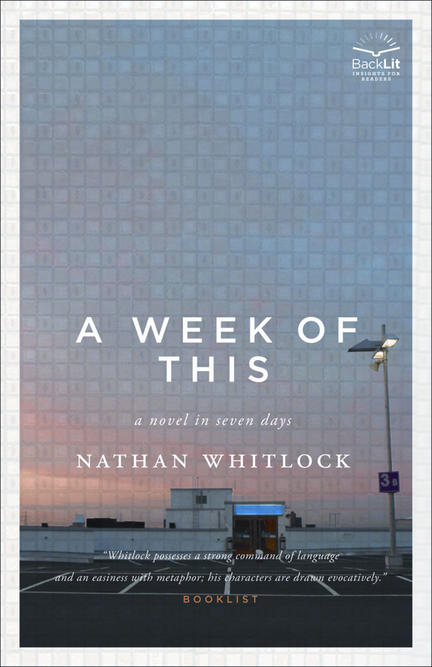 A brilliant, darkly comic, and startlingly honest novel, A Week of This follows the lives of an extended family over one increasingly desperate week. At the centre of the novel is 38-year-old Manda, a tough, sarcastic woman who has yet to make peace with the town she was brought to as a teenager after her parents’ messy divorce. Her estranged mother is crazy, her father is ill and in retreat, her damaged older brother is growing restless and distant, her stepbrother is a grown-up teenager without any real friends, and her husband is a tight-lipped, depressed store-owner who has been pressing Manda to have a baby.

Full of barbed dialogue and hilariously deadpan descriptions of family dynamics and the kind of awkward social dances that get performed every day, A Week of This is a book for people who always feel a little out of place, right where they are. People who are smart enough to know something has gone wrong, but can’t figure out how to fix it. People who know they aren’t kids anymore, but are not quite ready to grow up.

“A Week of This is bleak, funny, sad, smart, and unlike any novel I have ever read. The lives of these characters are so richly imagined I could taste the furnace dust, smell the backed-up sewer, feel the thump of every hangover. It’s an authentic, unsentimental literary experiment that doesn’t read like an experiment. Nathan Whitlock has exposed the timeless heart of lower-middle-class everywhere.” — Todd Babiak, author of The Book of Stanley and The Garneau Block.

Nathan Whitlock was the winner of the inaugural Emerging Artist in Creative Writing Award and the Short Prose for Developing Writers Award, as well as runner-up for the Bronwen Wallace Memorial Award. He is the review editor of Quill & Quire magazine. His writing and reviews have appeared in The Toronto Star, Saturday Night, The Globe and Mail, Maisonneuve, Toro, Geist, and elsewhere. He grew up in the Ottawa Valley and currently lives in Toronto with his wife and two children.

Excerpt: A Week of This: a novel in seven days (by (author) Nathan Whitlock)

Everything in Dunbridge was dead by October. The backyard gardens that had scaled old mop handles and broken hockey sticks throughout the summer, spreading up and out in a green lurch for the sky, now fell back in a withered heap. Leaves left a print of themselves on the sidewalk, looking trapped under ice. Colours everywhere were fading, as if the whole town were painted onto cement.

About a week before winter really hit, a woman walked her dog through a grey morning to the park at the end of her street. Her dog, a German shepherd with a puckered scar over its right hind leg, moved forward with its tongue out, looking like it didn’t expect ever to return to the warm house and the warm blanket it had just left. Damp leaves brushed against its side, and it cheered up a little, thinking it was about to be let free to pursue the smells invading its nose — not as vividly as they used to, but still strong enough to start its tail wagging in anticipation. The woman stopped at the park entrance and tightened her grip on the leash. The air was cold and sharp; she would go no further. “Just go, sweetie,” she said. “It’s freezing; mummy’s cold.” The jacket she was wearing wouldn’t close around her chest. It was her son’s — she hadn’t yet dug her own out from the basement. She looked at the trees and tried not to think about cigarettes.

The time of parks was nearly up — there hadn’t been any kids in this one since school started. For weeks she’d seen only other dog owners; they would stamp impatiently and look around as if worried about snipers. Locks were appearing on the doors of the public washrooms. All of a sudden no one believed in summer anymore.

A man appeared without a dog on the arched bridge spanning the creek. He wore a heavy, blue parka with the hood up and was walking fast, sending billows of agitated white breath ahead of him. The woman stepped back and pulled Diamond — who was already going into a squat — between herself and the man. He was wearing wool mittens like a little boy. He stopped when he saw her, then turned around and went quickly back over the bridge and across to the far side of the park. Wind came through after him and got under the woman’s jacket. By the time they got home she’d already decided Diamond was going to have to make do with the backyard from now on.

“Watch the park,” she told her son later, “there’s some freaks hanging around in there.”

The man in the parka sat and rested on a bench covered over in brown leaves, feeling their dampness coming through the seat of his pants. He’d walked nearly the entire length of Dunbridge that morning, tramping through every cold park like Jack Frost in mittens. Now he was feeling hungry, the side of his face was throbbing, and he still had to get ready for work in a few hours. He decided to give himself exactly two more minutes of rest before starting again, and even checked his broad-faced watch to mark the time. Squirrels ran up and sniffed at the shrunken-head apples on the ground all around him. He took off one mitt and got to work on the inside of his nose. More wind came through, bringing the last of the leaves down. The park was naked and waiting. Though it looked like it could, Ken decided it wasn’t going to snow that day.

Other titles by Nathan Whitlock