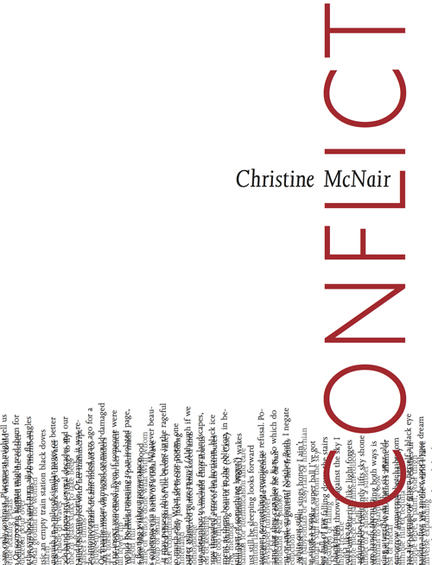 Conflict interweaves ghosts, bad communication, the uncanny and the archival, to create a collection of poems that break down remembrance into abandoned historic markers, jet fuel, keening, or teeth. What you are given (this is a gift) is an insistent refusal to silence or shift. In exchange, the reader must face the impossibility of erasure, a gritty resistance to mourn a fight. Conflict is a collection of red balloons that intersplices and interweaves through various forms of conflict that occur in language, motion, architecture, emotions; between individuals, systems, and mechanical silences.

Christine McNair was born on June 6, 1978, (the sixth day of the sixth month at six-fifty-six.) She completed a BA (Hons) from Acadia University in Nova Scotia, with a major in English Literature and a minor in Art History. She also completed a Master’s degree in Conservation Studies (Books and Library Materials) at West Dean College in the UK. Besides being a writer, McNair works full time at the Canadian Conservation Institute in Ottawa, in a special agency of the Department of Heritage, as a book “doctor” or Conservator. Conflict is her first book.

McNair is a one-woman fireworks spectacle.
- Grady Harp via literaryaficionado.com

"McNair takes us through poetry that forms together, while simultaneously breaking free from itself and forcing us to focus on our own loves and limitations."
- Cassie Leigh via greyborders.blogspot.ca

Other titles by Christine McNair