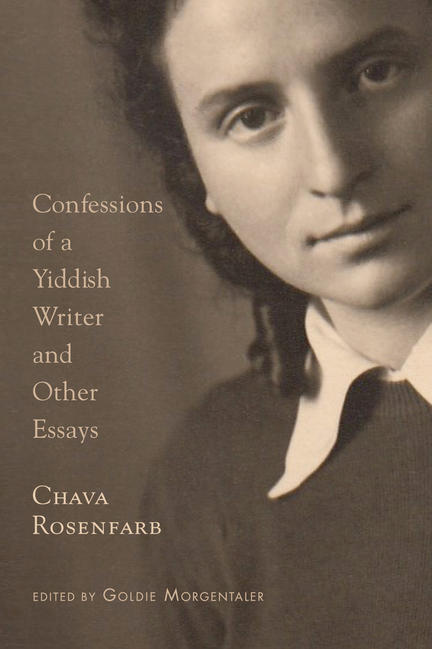 Chava Rosenfarb (1923–2011) was one of the most prominent Yiddish novelists of the second half of the twentieth century. Born in Poland in 1923, she survived the Lodz ghetto, Auschwitz, and Bergen-Belsen, immigrating to Canada in 1950 and settling in Montreal. There she wrote novels, poetry, short stories, plays, and essays, including The Tree of Life: A Trilogy of Life in the Lodz Ghetto, a seminal novel on the Holocaust.

Confessions of a Yiddish Writer and Other Essays comprises thirteen personal and literary essays by Rosenfarb, ranging from autobiographical accounts of her childhood and experiences before and during the Holocaust to literary criticism that discusses the work of other Jewish writers. The collection also includes two travelogues, which recount a trip to Australia and another to Prague in 1993, the year it became the capital of the Czech Republic. While several of these essays appeared in the prestigious Yiddish literary journal Di goldene keyt, most were never translated. This book marks the first time that Rosenfarb's non-fiction writings have been presented together in English.

A compilation of the memoir and diary excerpts that formed the basis of Rosenfarb's widely acclaimed fiction, Confessions of a Yiddish Writer and Other Essays deepens the reader's understanding of an incredible Yiddish woman and her experiences as a survivor in the post-Holocaust world.

Chava Rosenfarb was born in the industrial city of Lodz, Poland. She began writing at the age of eight, with the encouragement of her father. One of the most prominent Yiddish writers living today, Chava has received numerous prizes for her work, including the 1988 and 1993 Prize of the Congress for Jewish Culture (New York), the Sholem Aleichem Prize (Tel-Aviv), the 1985 Atran Prize (New York) and the 1972 Niger Prize (Buenos Aires). Her novel, Der Boym fun lieb (The Tree of Life) won the 1979 Itsik Manger Prize, the worldâ€™s highest Yiddish literature honour. Chava lives in Lethbridge, Alberta.

Goldie Morgentaler is the daughter of Chava Rosenfarb and Henry Morgentaler. She is Associate Professor of English at the University of Lethbridge, where she teaches nineteenth-century British and American literature, and has published numerous translation from Yiddish to English. She has translated of much of her motherâ€™s work, including The Tree of Life and Survivors: Seven Short Stories, for she won the 2005 Helen and Stan Vine Jewish Book Award.

Other titles by Chava Rosenfarb

Other titles by Goldie Morgentaler