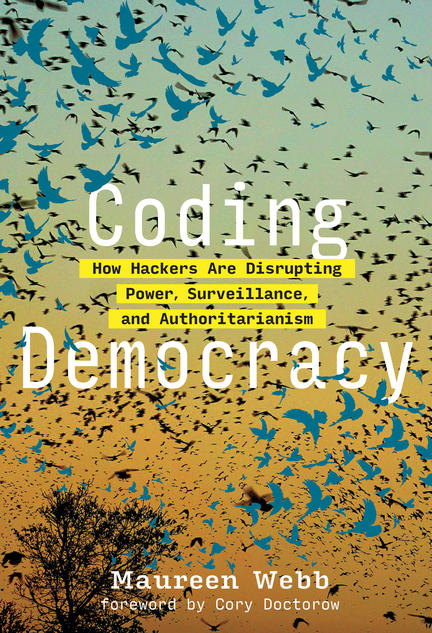 Hackers as vital disruptors, inspiring a new wave of activism in which ordinary citizens take back democracy.

Hackers have a bad reputation, as shady deployers of bots and destroyers of infrastructure. In Coding Democracy, Maureen Webb offers another view. Hackers, she argues, can be vital disruptors. Hacking is becoming a practice, an ethos, and a metaphor for a new wave of activism in which ordinary citizens are inventing new forms of distributed, decentralized democracy for a digital era. Confronted with concentrations of power, mass surveillance, and authoritarianism enabled by new technology, the hacking movement is trying to “build out” democracy into cyberspace.

Webb travels to Berlin, where she visits the Chaos Communication Camp, a flagship event in the hacker world; to Silicon Valley, where she reports on the Apple-FBI case, the significance of Russian troll farms, and the hacking of tractor software by desperate farmers; to Barcelona, to meet the hacker group XNet, which has helped bring nearly 100 prominent Spanish bankers and politicians to justice for their role in the 2008 financial crisis; and to Harvard and MIT, to investigate the institutionalization of hacking. Webb describes an amazing array of hacker experiments that could dramatically change the current political economy. These ambitious hacks aim to displace such tech monoliths as Facebook and Amazon; enable worker cooperatives to kill platforms like Uber; give people control over their data; automate trust; and provide citizens a real say in governance, along with capacity to reach consensus. Coding Democracy is not just another optimistic declaration of technological utopianism; instead, it provides the tools for an urgently needed upgrade of democracy in the digital era.

Cory Doctorow is a multi-award-winning science fiction author, technologist, activist and speaker. His novels include Down and Out in the Magic Kingdom, Eastern Standard Tribe and the recently released contemporary fantasy, Someone Comes to Town, Someone Leaves Town.

"Coders seeking to do good in the world will find much inspiration here."

"She's building a powerful case for the fact that technology as we know it—omnipresent, flawed, world-improving—has become so entrenched and static that it really does need the hackers worrying the edges of its firewalls. In Webb's telling, hackers aren't heroes destined to bring the world to a grand new order of their own transgressive imaginings. They're agents of positive chaos."

"'Coding Democracy' is a thorough, well-written work of scholarship that should be seen as a welcome addition to a growing body of work about the relationship between computing, society and government. A lawyer, Webb is able to weave the hacker narrative into various strands of thought relating to political science, history, legislation, law enforcement, regulations, civil law, politics and ethics."

—Journal of Cyber Policy
"Coding Democracy: How hackers are disrupting power, surveillance, and authoritarianism  by Maureen Webb, which says hurrah for the hackers who are inspiring activism that may let ordinary citizens take back democracy."
—New Scientist

Other titles by Cory Doctorow

Four Tales of Our Present Moment

The Rapture of the Nerds

Down and Out in the Magic Kingdom