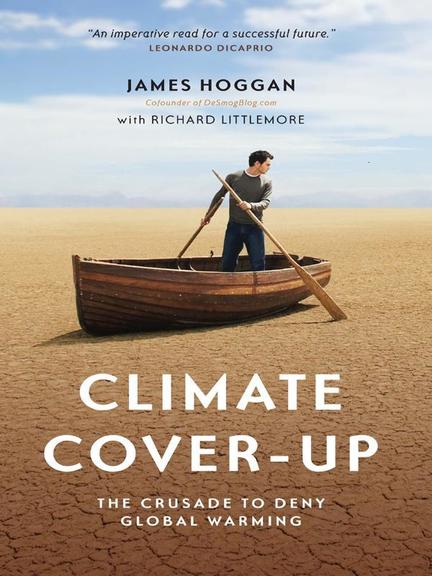 An insider's view of how the energy industry has fuelled a bogus controversy about climate change.

This book rips the lid off the campaign to discredit scientists, confuse journalists, and deny climate change. The tactics have been slick, but PR expert James Hoggan and investigative journalist Richard Littlemore have compiled a readable, accessible guidebook through the muck. Beginning with leaked memos from the coal industry, the oil industry and the tobacco-sponsored lie-about-science industry, the authors expose the plans to ""debunk"" global warming; they track the execution of those plans; and they illuminate the results -- confusion, inaction, and an epidemic of public mistrust.

Climate Cover-Up names names, identifying bogus experts who are actually paid lobbyists and flaks. The authors reveal the PR techniques used to misinform, to mangle the language, and to intimidate the media into maintaining a phony climate change debate. Exposing the seedy origins of that debate, this book will leave you fuming at the extent, the effect, and the ethical affront of the climate cover-up.

""[Climate Cover-Up] will convince most readers that there is a ""Climategate"" scandal...powerful vested interests, the greedy, and those focused on the short-term continue to confuse the public by falsely framing the debate as yet to be settled."" -- American Scientist""An imperative read for a successful future."" -- Leonardo DiCaprio

""If you care about your wellbeing, the fate of your children and the environment, please read James Hoggan's new book, Climate Cover-Up."" -- Daily Observer

James Hoggan is president of the Vancouver PR firm Hoggan & Associates and chair of the David Suzuki Foundation board. A tireless advocate for ethics and integrity in public relations, he founded the influential website DeSmogBlog to expose misinformation campaigns that pollute public debate around climate change and the environment. He has advised a wide range of organizations such as the governments of B.C. and Ontario, the Dalai Lama Center, the B.C. Law Society, and the B.C. Treaty Commission. Hoggan has also served as a member of Shell Global's External Review Committee and is the author of Climate Cover-Up and Do the Right Thing.

Richard Littlemore is a strategist and senior writer at James Hoggan & Associates and the editor of DeSmogBlog.com. He has served in the Canadian government's Kyoto implementation process and as an elected representative to the metropolitan government of Vancouver, B.C. He lives in Nanaimo, B.C.

Other titles by James Hoggan

I'm Right and You're an Idiot - 2nd Edition

I'm Right and You're an Idiot

I'm Right and You're an Idiot (PDF)

I'm Right and You're an Idiot (EPUB)