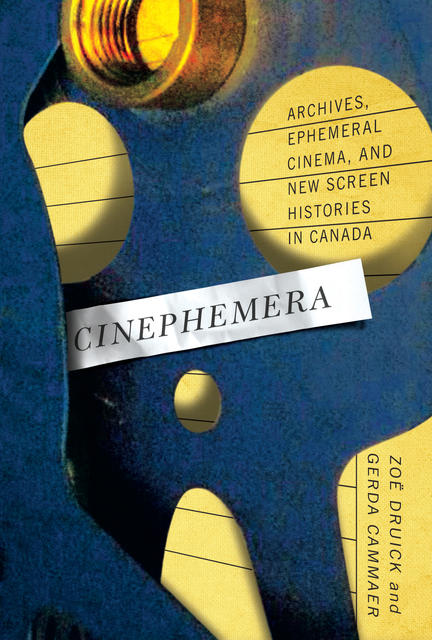 What do digital platforms mean for cinema studies in Canada? In an era when digital media are proliferating and thousands upon thousands of clips are available online, it seems counter-intuitive to say that audio-visual history is quickly disappearing. But the two processes are actually happening in tandem.

Adopting a media-archaeological approach to the history of cinema, contributors to Cinephemera cover a wide range of pressing issues relating to Canadian cinema's ephemerality, including neglected or overlooked histories, the work of found footage filmmakers, questions about access and copyright, and practices of film archiving. Spurred by rapid changes to technologies of production, viewing, and preservation, this collection showcases both leading and emerging scholars grappling with the shifting meaning of cinema as an object of study. Film historians are put in conversation with experimental filmmakers and archivists to provide renewed energy for cinema studies by highlighting common interests around the materiality and circulation of films, videos, and other old media.

Considering a wide range of cases from the earliest days of silent film production to the most recent initiatives in preservation, Cinephemera exposes the richness of moving image production in Canada outside the genres of feature length narrative fiction and documentary - a history that is at risk of being lost just as it is appearing.

Zo? Druick teaches media studies, popular culture, and cultural theory in the School of Communication at Simon Fraser University. Her publications include Projecting Canada: Government Policy and Documentary Film at the National Film Board (2007) and articles on documentary and educational film and cultural policy in the Canadian Journal of Film Studies, Canadian Journal of Communication, and Topia.

Aspa Kotsopoulos is Senior Policy Analyst, Television Policy and Applications, Broadcasting, Canadian Radio-television and Telecommunications Commission (CRTC). She has taught at Simon Fraser University, the University of British Columbia, and the University of Victoria. She has published a number of articles on television and film in a variety of journals and essay collections.

Other titles by Zoë Druick

Government Policy and Documentary Film at the National Film Board

Other titles by Gerda Cammaer