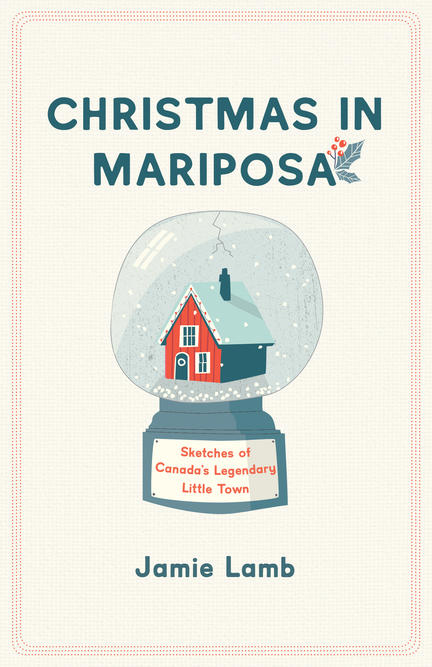 Longlisted for the Stephen Leacock Memorial Medal for Humour

A funny and heart-warming tribute to Canada’s most famous small town, and its most celebrated humourist, Stephen Leacock.

Many Canadians grew up in small towns, or at least in neighbourhoods that felt like small towns. But what if you grew up in Canada’s most famous small town—Stephen Leacock’s Mariposa? This was the world that journalist Jamie Lamb was raised in, the actual place that inspired Leacock’s Canadian classic, Sunshine Sketches of a Little Town, over a century ago. The Mariposa of Lamb’s time is slightly different, yet still embodies the heart and soul, the eccentricities and bizarre local customs of Leacock’s sketches.

Christmas in Mariposa is a celebration of that town and its people. It tells of secret gardens, special rinks, oddball hotels, remarkable foods, fast boats and sunken aircraft, Christmas Eve fireworks, and the best Christmas office party in the country. It describes a place where Christmas could be celebrated in summer with a Baby Jesus look-alike contest, Canada’s only officially sanctioned reindeer races, and the Three Wise Men arriving with gifts by parachute. It transports readers to world where Gordie Howe once dropped by for a skate, and Glenn Gould regularly came to eat a well-done steak and six Parker House rolls slathered in butter at a Chinese restaurant. Jamie Lamb’s Mariposa is timeless and quintessentially Canadian.

Jamie Lamb has been a film critic, Ottawa bureau chief, and columnist for The Vancouver Sun, and a reporter at the Orillia Daily Packet & Times, Charlottetown Guardian, Peterborough Examiner, Penetanguishene Citizen, and Prince George Citizen. A Nieman Fellow of Journalism at Harvard University, Lamb was a regular commentator on CBC’s Morningside and Newsworld, has written for numerous Canadian and US magazines, and taught communications seminars at Harvard University, Boston College, the MIT Media Lab, and the US Naval War College. He is married with two grown children and lives in Tsawwassen, BC.

“Christmas in Mariposa is magical, one of the happiest books I’ve read in many years. Jamie Lamb had the brilliant idea of going back to his old hometown and remembering the stories that shaped his life. These superb stories are almost incredible, but are far too good not to be true."

Douglas Gibson, author of Stories about Storytellers and Across Canada by Story

“Jamie Lamb’s stories about Mariposa—Leacock’s Wonderland, Canada’s Camelot—are artfully written and beautifully told. Christmas in Mariposa has the markings of a Canadian classic.”

“In Christmas in Mariposa, Jamie Lamb has given us wonderful, wry, and wistful stories filled with humour and heart. He has restored Mariposa to our literary map, where Leacock first put it so many years ago. Bravo!”

Terry Fallis, two-time winner of the Leacock Medal for Humour

“Sweet, sage, witty, and wise, Christmas in Mariposais a treasure to go on the shelf alongside Sunshine Sketches of a Little Town and Smith and Other Events as one of the jewels of Canadian prose. When someone asks you to describe Canada, hand them this and take the rest of the day off.”

John Armstrong, author of the Leacock Medal-nominated A Series of Dogs and Guilty of Everything