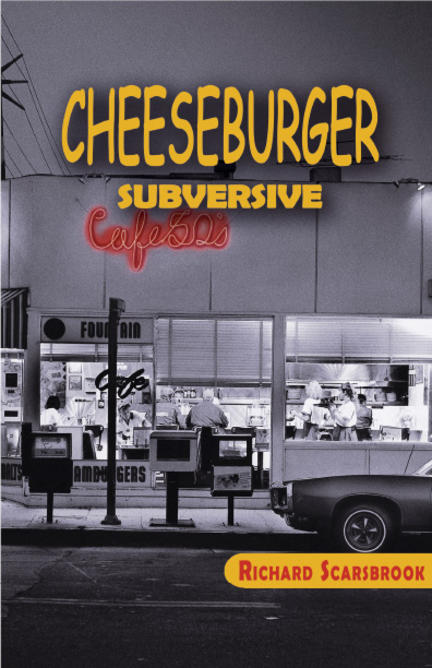 This compelling coming of age story will leave older teenage boys alternatively snorting with laughter and silently shivering in recognition at the strength and power of bullies. Dak Sifter grows from a bright, 12-year-old beginning to notice how men treat their sons and wives, through the suicide of an abused friend, to buying his first car, writing poetry and helping a friend connect with a girl. And arching over all his teenage years is Dak's love for Zoe Perry, whom he adores and relentlessly pursues in spite of her view of him as a friend, her relationships with other boys and her left-leaning politics. Scarsbrook has nailed the Canadian teenage boy's insecurities, victories over bullies and persistent sexual longing to the wall. In a laugh-out-loud-funny style laced with witty, sardonic remarks by our hero, Dak, Scarsbrook brings alive the pain of rejection, the excitement of real friendship and the ache of a lost love. This novel is divided into twelve loosely connected stories tied to Dak's school years (for example, Cruisin' Machine - Grade 10") from grade 7 to first year university. Although there are some classroom scenes (notably a very funny send up of hippy teacher Quentin Alvinstock's approach to writing), most of these linked stories take place at home and work and at (a howlingly funny) MacDonald's where Dak is refused service because he isn't wearing a shirt. (Just another reminder to teachers that the most important, memorable time in teenagers' lives do not happen at school and are intimately connected to other teens.) Scarsbrook's first person style moves the action along quickly and effortlessly. Dak's self-deprecating remarks and the sharp, witty dialogue allow the reader in on both Dak's feelings and other characters' strengths and weaknesses. Other teenage boys and some of the adult male characters use profanity in surprise and in anger, as they do in real life. Dak's voice is that of the gifted teenage boy: articulate, insightful, lustful, and more thoughtful as he ages. Dak's life story plays out in Faireville, a mythical yet typical suburb of the southern Ontario strip between Toronto and Ottawa. From school bus horrors to the local pickle factory to the ubiquitous MacDonald's, this story could be taking place anywhere in southern Canada. The time is a little less clear. It could be present day (they drive on Hwy 401), but it could be almost any time in the 1990's. The hero finds out about sex from Winifred Bright, the older loose woman who will sleep with any young man around. It would be more likely today for Dak to find out about sex from one of his willing classmates. This is the only odd note in an otherwise sharp photo of how a teenage boy becomes a wonderful man. Dak is a very sympathetic character who tries to keep his head down and stay out of trouble, a boy who is honest and thoughtful, and is, above all, the observer, the person who watches and reports on the wacky situations and people around him. He survives Xmas with weird relatives, the brutality of the local bullies, the viciousness of the pickle factory boss, the dishonesty of an evangelist, and having to share an art gallery job with his sister. Along the way, he gathers wisdom and the determination to live well. Secondary characters, such as Zoe and Dak's parents and neighbours, reveal their ideals and personalities through their actions and dialogue." —CM Materials

Richard Scarsbrook grew up in the tiny rural community of Olinda, Ontario. He lived and taught in Petrolla for nearly a decade, where he acted, directed, and served as a member of the board of directors for the community theatre. In Petrolia, he also wrote original songs, and played the drums and sang in a band called The Know. He also began publishing his first short stories and poems at this time. Scarsbrook now makes his home in Toronto where he teaches creative writing courses at Humber Colege and George Brown College. He also plays and sings in the rock bands The Featherless Bipeds, The Nerve, and Disorderly Conduct, and has performed in venues such as The Rivoli, The Guverment, Healey's Roadhouse, The Opera House, The Tattoo Rock Parlour, The Royal York Hotel, The Hard Rock Cafe and The Black Swan (all in Toronto), The Hard Rock Cafe and The Liquor Store Bar in Ottawa, and The Just For Laughs Studio in Montreal. Scarsbrook's fiction and poetry have appeared in journals and Magazines in Canada and internationally including The Guardian Unlimited (UK), The FISH Anthology (Ireland), Verbicide (US), Prairie Fire, Descant, Matrix, Carousel, The Dalhousie Review, PRECIPICe, Rampike, Storyteller, The New Orphic Review, The Nashwaak Review, The Harpweaver, The Backwater Review, NeWest Review, Lies With Occasional Truth, The Moose and Pussy, Jones Avenue, Surface and Symbol, and Zygote. His stories and poems have won praise and prizes including the 1998 Hinterland Award for Prose, the 2001 New Orphic Short Story Prize, the 2001 Scarborough Arts Council Poetry Prize, the 2002 Lawrence House Centre for the Arts Short Story Prize, and the 2009 Matrix LitPop Award for Fiction. His first book publication was Guessing at Madeleine, a collection of poems which won the 1996 Cranberry Tree Press Poetry Prize. Scarsbrook's first novel, Cheeseburger Subversive (Thistledown Press), 2003) received positive reviews and great reader response.  Renowned author W.P. Kinsella (Shoeless Joe, Dance Me Outside), wrote this in Books in Canada: "Cheeseburger Subversive is a coming of age story written with humour and panache. Scarsbrook has a special eye for the absurd, a wonderful way of looking at the world that turns tragedy into humor. A very funny and heart-warming debut." Cheeseburger Subversive was short listed for The Canadian Library Association's 2004 Young Adult Book of the Year Award, The Ontario Library Association's 2005 White Pine Award, and the 2005 Stellar Book Award. Featherless Bipeds ( Thistledown ,2006), its sequel, was also short-listed for short listed for the Canadian Library Association's 2007 Young Adult Book of the Year Award, and listed for the 2008/2009 Stellar Book Award.  Storyteller: Canada's Short Story Magazine wrote: "Featherless Bipeds remains at all times as tightly focused as the best short stories...Fans of live pop music will enjoy Scarsbrook's wonderful evocations of the characters, venues, trials, and successes of such a career, as well as the experience of making music, both onstage and off. " Scarsbrook's latest novel The Monkeyface Chronicles won the 2011 Ontario Library Association's White Pine Award. CM Magazine called the book a "multi-layered, engrossing, complex tale", and Resource Links said "Scarsbrook is an excellent writer with great comic overtones".  A review by author Ann Ewan (Firedrake, Brondings' Honour) said of The Monkeyface Chronicles, "It reminds me of the books of Paul Quarrington and John Irving, creating an over-the-top yet close-to-real world."

Goddammit, get back here! Cobb loses his temper. He kicks one of the machines, and his cursing momentarily stops. He falls to the concrete holding his foot, rolling back and forth, howling like he's just been shot with a .44 Magnum. "My toe! My toe! Christ, I broke my fuckin' toe!" The shift change horn blows, and all of the workers from the surrounding lines come over to see what's going on. The men who had departed early from L-17 also wander back. This is a show that nobody wants to miss. And now I commit a serious error of judgment. I wander over to where Cobb is rolling around and say: "Gee, Mr. Cobb, guess you should have been wearing those steel-toed boots, eh?" Cobb's face turns from red to purple as the other workers laugh at him. He shimmies across the floor on his butt, still cradling his injured foot in one hand, and reaches up onto the halted conveyer belt. With his free hand, Cobb grabs a jar of pickles. Jowls shaking, his face glowing crimson, he screams: "God! Damn! Fucking! Smartass! Kid!" He hurls the jar at me with all his strength. I raise my stiff arms to shield my face. The jar shatters against my wrists.

Other titles by Richard Scarsbrook

Nothing Man and the Purple Zero

Richard Scarsbrook: The Authors That Made Me Want to Write

The books we read in school prove excellent authorial inspiration.