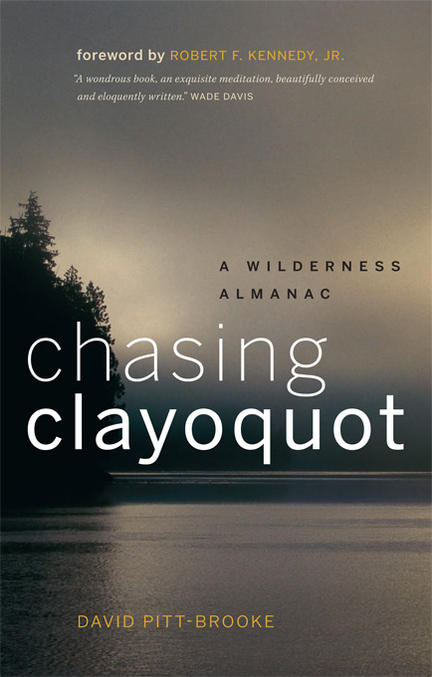 First published in 2004, and now with a new preface by the author, this book of natural history, environmentalism, and politics explores one of the earth's last primeval places: Clayoquot Sound. Close to a million visitors come to this unesco Biosphere Reserve along Vancouver Island's west coast, drawn by its unspoiled natural beauty. Robert Kennedy, Jr. writes in the foreword: ""I am grateful for this book because it reminds me of what I loved best about being involved in the fight for Clayoquot Sound...It was a place that engaged all your senses.""

As Barry Lopez did with the north in Arctic Dreams, David Pitt-Brooke, called ""a Thoreau for Clayoquot"" by the Globe and Mail, takes the reader on twelve journeys, one for each month of the year. Each journey covers the outstanding natural event of that season: whale watching in April, shorebird migration in May, the salmon spawn in October.

David Pitt-Brooke, a veterinarian and researcher, writes for a variety of nature and wildlife publications and has received a Canadian Science Writers' Association Award for Outstanding Contribution to Science Journalism. He was an environmental education officer for Parks Canada for ten years. Pitt-Brooke lives in Tofino, British Columbia, on the edge of Clayoquot Sound.

Robert F. Kennedy, Jr. serves as Chief Prosecuting Attorney for the Hudson Riverkeeper and was named one of Time magazine's ""Heroes for the Planet"" for his work in the fight to restore the Hudson River. Kennedy has worked on environmental issues across the Americas and has assisted several indigenous tribes in Latin America and Canada in successfully negotiating treaties protecting traditional homelands. His published books include Crimes Against Nature (2004), The Riverkeepers (1997) and his articles have appeared in The New York Times, The Washington Post, Los Angeles Times, The Wall Street Journal, Newsweek, Rolling Stone, Atlantic Monthly, Esquire, The Nation, Outside Magazine, The Village Voice, and many other publications."

Other titles by David Pitt-Brooke

Other titles by Robert Kennedy Jr.

Dispatches from a Northern Rainforest