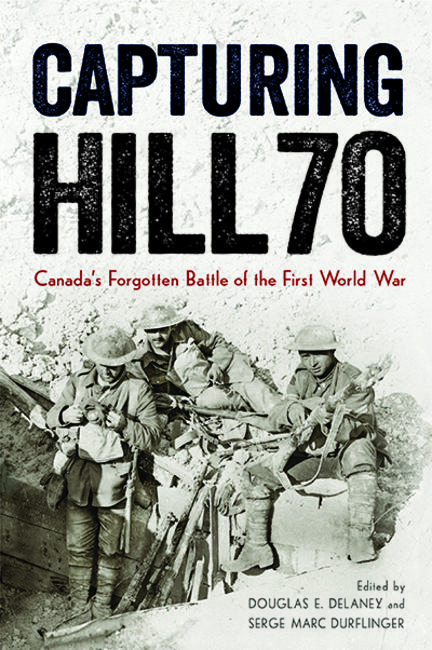 In August 1917, the Canadian Corps captured Hill 70, vital terrain just north of the French town of Lens. The Canadians suffered some 5,400 casualties and in three harrowing days defeated twenty-one German counterattacks. This spectacularly successful but shockingly costly battle was as innovative as Vimy, yet few Canadians have heard of it or of subsequent attempts to capture Lens, which resulted in nearly 3,300 more casualties. Capturing Hill 70 marks the centenary of this triumph by dissecting different facets of the battle, from planning and conducting operations to long-term repercussions and commemoration. It reinstates Hill 70 to its rightful place among the pantheon of battles that forged the reputation of the famed Canadian Corps during the First World War.

Douglas E. Delaney holds the Canada Research Chair in War Studies at the Royal Military College of Canada. He is the author of The Soldiers’ General: Bert Hoffmeister at War, which won the 2007 C.P. Stacey Prize for Canadian Military History, and Corps Commanders: Five British and Canadian Generals at War, 1939-1945.

Serge Marc Durflinger is a professor in the History Department at the University of Ottawa. His publications include Fighting from Home: The Second World War in Verdun, Quebec and Veterans with a Vision: Canada’s War Blinded in Peace and War.

The editors and contributors are to be congratulated on producing a stimulating and thoughtful book that is a fitting tribute to the Canadians who fought and died to capture Hill 70, and that will hopefully be a precursor for further studies of other neglected Great War battles.

…Capturing Hill 70 has provided Canadians with a multi-faceted, impressively researched, and balanced account of the bloody engagements undertaken in August 1917…[it] succeeds in elevating the engagement to its proper position, provides a comprehensive account of what happened and why, and opens many avenues for future research.

…Hill 70 should gain the recognition it deserves as the first battle in the First World War planned, executed, and fought by Canadians…While taking nothing away from the accomplishment of Canadian arms at Vimy Ridge, Capturing Hill 70 puts these watershed 1917 battles into a detailed perspective…with the excellent collection of essays that comprise Capturing Hill 70. There is no romance here — only pragmatic efficiency in getting the job done in the Canadian way.

City of Water paints a much more comprehensive picture of the role and effects of water in the nineteenth- and twentieth-century city than other urban river histories have.

This new book, which chronicles the battle from its inception to its aftermath, asks two questions: Why was this small piece of ground so important, and how is it that now, a century later, almost no one remembers it? … Whatever the reason for Hill 70’s lack of recognition these days, this insightful, broad-ranging book ought to change that. It’s very hard to read it without thinking: This is an incredible story, and how is it possible I’ve never heard it until now?

Capturing Hill 70: Canada’s Forgotten Battle of the First World War is a thought provoking book worthy of attention. By casting new light on this important battle and offering new perspectives on the leadership of Arthur Currie and the operations Canadian Corps, it makes an important contribution to our understanding of an important period of Canadian military history.

Other titles by Douglas E. Delaney

The British Empire at War

Other titles by Serge Marc Durflinger

Veterans with a Vision