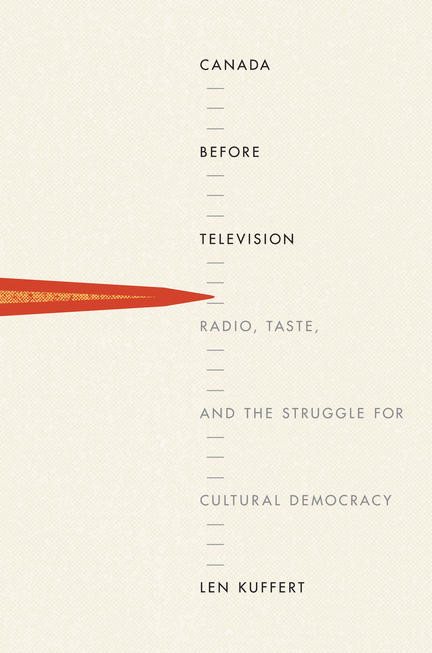 Before screens could be stared at, listeners lent their ears to radio, and Canadian listeners were as avid as any. In Canada before Television, Len Kuffert takes us back to the earliest days of broadcasting, paying particular attention to how programs were imagined and made, loved and hated, regulated and tolerated.

At a time when democracy stood out as a foundational value in the West, Canada’s private stations and the CBC often had conflicting ideas about what should or could be broadcast. While historians have documented the nationalist and culturally aspirational motives of some broadcasters, the story behind the production of programs for both broad and specialized audiences has not been as effectively told. By interweaving archival evidence with insights drawn from secondary literature, Canada before Television offers perspectives on radio’s intimate power, the promise and challenge of US programming and British influences, the regulation of taste on the air, shifting and varied musical appetites, and the difficulties of knowing what listeners wanted.

While this mixed system divided Canadians then and now, the presence of more than one vision for the emerging medium made the early years of broadcasting in Canada more culturally democratic for listeners who stood a better chance of getting both what they already liked and what they might come to like. Canada before Television offers an insightful look at the place of radio and debates about programming in the development of a cultural democracy.

Len Kuffert is associate professor of history at the University of Manitoba.

Other titles by Len Kuffert