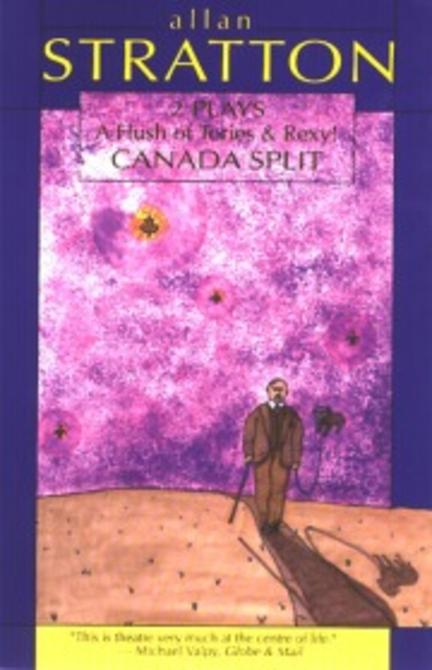 Read together, A Flush of Tories and Rexy! form comic bookends, the first viewing our current dilemmas in the context of Conservative leadership in the last century; the second, in the context of more recent Liberal leadership. A Flush of Tories was widely produced in Canada and adapted for a drama special on CBC; Rexy! won the Chalmers Award, the Dora Mavor Moore Award, and the Canadian Authors' Association Award.

Allan Stratton is an acclaimed playwright and author, who began his career acting at the Stratford Festival and regional theaters across Canada. His plays include "Nurse Jane Goes to Hawaii" and "Rexy!," winner of a Chalmers Award, the Dora Mavor Moore Award and the Canadian Author's Association Award. Leslie's Journal is Allan's first novel for teens. Allan now lives in Toronto with his partner, a dog, three cats and any number of fish.

rom A Flush of Tories

Bowell: We came this close, Abbott. (Squeezes his fingers together to show how close.) This close to having a bloody Papist as P.M. I have it on authority. Thompson. What a scandal that would have been. (Points to Heaven.) But God was watching over us and plucked us from the jaws of Satan.

Bowell: No time for pussy willows. Not with this Manitoba business. It's a divine test. The forces of darkness beset us on every flank. Our Protestant values are under siege.

Abbott: Yes, but I'm up to my ears in packing crates. (He rises, expecting Bowell to take the hint and leave.)

Bowell: (Rising.) And I must go. But before I do, may I say, Prime Minister, you can count on me. For I have been tested. God has put me through the flame. He has tempered me like steel.

Abbott: I'm sure he has.

Bowell: He has readied me to be your second-in-command.

Bowell: Oh yes. I understand their treachery, you see. I've dealt with their intrigue.

Abbott: I beg your pardon?

Bowell: I know all about...them. (He taps his nose knowingly and begins to pace as he recounts his story with great animation.) The year was 1860 and I was Deputy Grand Master of the Provincial Orange Lodge of Central Canada. And do you know whose hand I was to shake?

Abbott: (Resigned; he's heard the story hundreds of times.) The Prince of Wales.

Bowell & Abbott: (Abbott mutters in synch.) He was on a Royal Tour and coming all the way to Kingston to shake my hand.

Bowell: (Continues solo, as Abbott rolls his eyes.) Oh he'd stopped in Quebec, to let those Ca-tho-lics know he was their king-in-waiting too. And the little mackerel snappers fed him pot luck suppers and haute cuisine. But he had loftier venues ahead. Kingston! Belleville! Me! We Orangemen were not to be outdone. (He whips up the fire poker to demonstrate.) We erected arches, festooned with garlands and decorations from our most sacred rituals. The way was prepared to honour him—the Prince of Wales and our future king! The streets bedecked with flowers, Union Jacks on every corner, in every shop, home and baby carriage within five counties.

Bowell waves fire poker, terrorizing Abbott. Abbott falls back into chair so as not to be struck by the poker.

Bowell: (Bearing down.) Oh yes, it was impressive. But then—oh dark day, oh black decision—the Duke of Newcastle, the Prince' s aide and secret PAPIST, demands we take our decorations down—demands we dismantle the tokens of our mighty Orange order. If not, said he, the Prince cannot, indeed will not, set foot in Kingston, nor in Belleville, nor will he shake your hand!

Abbott: He made a bit of a scene.

Bowell: But I was not about to be outdone. "Our decorations stay up," said I. "We're Orange, Protestant, and proud of it. And if the Prince of Wales doesn't like it, he can bloody well high-tail it back to England." Which he did. (He beams.) You see what leadership can accomplish?

Abbott: But surely you're a monarchist, Mr. Bowell.

Bowell: The staunchest in the land.

Abbott: Then surely you wanted the Prince to land.

Bowell: Of course. But that's not the point. Those Romanists had endeavored to have it all their own way. It was high time such impudence be chastized.

Abbott: But you ended up without the Prince.

Bowell: That's the price you have to pay for diplomacy. Diplomacy. Those are skills you'll be needing with this Manitoba crisis. Skills I shall put at your service as your second-in-command.

Mackenzie: (Materializing.) And peace there'd be were it not for the bloody Brits. Hitler doesn't want war. He's becoming desperate.

King: He's not becoming desperate. He's become insane. Today I spoke to Lord Riverdale. And I spoke bravely—like a Mackenzie. But even as the words fell from my lips I saw smoke, smelt blood, felt death. In my dreams Parliament is a big brick building with stones the size of Beelzebub's teeth, spires like ivory horns and a tail that's a road across this country leading to gunboats.

Mackenzie: Then fight. Fight, goddamn it.

King: But I can't. In the last war we fought and conscripted. It tore this country apart—riots in Montreal and a bill to secede proposed in Quebec's own legislature. To fight and conscript again in defense of Britain?

Mackenzie: Then resist the British buggers.

King: But I can't. Lord Riverdale's right. I'll have English Canada at my throat. I won't be the man to break this country in two.

Mackenzie: Make up your mind, laddie.

King: But I can't. God, I knew this day would come—war in my bones. You lied to me!

Mackenzie: We'll hear no more of that.

Lights fade swiftly on Mackenzie; lights up on Mrs. King.

Mrs. King: That's no way to speak to your grandfather.

King: But Momma, I'm deep in the woods and it's getting dark and I'm lost. I feel so alone. No single living soul to hold me—to comfort and strengthen me. I knew from the moment I entered this town that to enter politics was to enter battle and that to enter battle without a wife would be unbearably lonely.

Mrs. King: That's as may be. But the Lord wills and we must abide.

King: Why wouldn't you even meet her?

Mrs. King: Her? That nurse of yours?

Mrs.King: I didn't meet Miss Grosshert because I loved you. Heavens, child, where would you be today if you'd married her? A school teacher perhaps. Not a leader of men. Not a prime minister. And Grosshert. Mathilde Grosshert—the very idea our country about to be at war with the Germans and our prime minister married to one? Oh Willy, you and this country that needs you now to be its saviour, you both should praise God I stood firm.

King: I never met anyone else. Never anyone like Mathilde.

Mrs. King: One can live without her kind.

King: Her kind was love and now I'm alone and so many decisions and no one to talk to...

King: Pat's a wonderful dog, a little saint—but it's not the same.

Mrs. King: I see. So it's filth you're talking. Filth you wanted.

Mrs. King: Little dog Pat's your companion—but what you're wanting is sweating and grunting. Bodily functions. Women that move like your hand.

Mrs. King: And well you might be embarrassed. My little boy who gave religious services at the Sick Children's Hospital and sang "Rescue the Perishing" at the Haven.

“Rexy! is not only as topical as the debate on the constitution but it is a great deal wittier. Here is Canadian history rendered with tongue tucked firmly in cheek without, however, demeaning [Prime Minister William Lyon Mackenzie] King himself. King is a cunning, indeed superb, politician as well as a rare and fascinating eccentric. The grandson of the rebel William Lyon Mackenzie, he was in thrall to history. He was also a spiritualist who conducted seances in his Ottawa home and a lifelong bachelor who bought sex from prostitutes. And as Stratton makes clear, he was also as vain as a turkeycock, a little man fretting to strut on the world stage denied him by his Quebec constituency.”

Other titles by Allan Stratton

The Way Back Home

The Resurrection of Mary Mabel McTavish

Curse of the Dream Witch