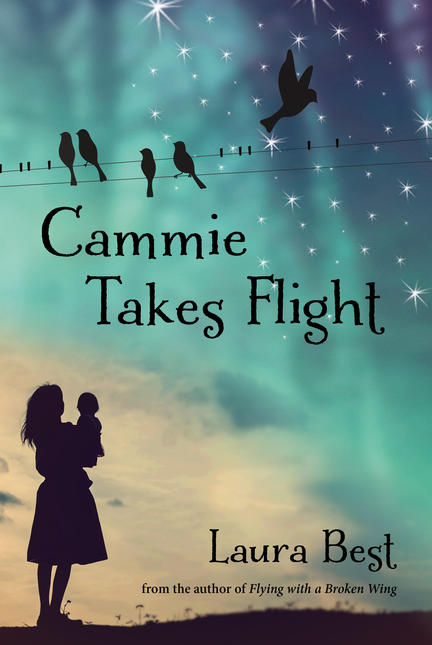 Eleven-year-old Cammie Turple grew up with more obstacles than most. Visually impaired and abandoned by her parents, she was raised by her tenacious, bootlegging aunt in rural Tanner, Nova Scotia. After Cammie and her best friend, Evelyn Merry, destroy the local moonshine still, forcing Evelyn's abusive, alcoholic father to sober up but nearly killing Evelyn in the process, Cammie convinces her aunt to send her to the Halifax School for the Blind.

The anticipated follow-up to Flying with a Broken Wing, Cammie Takes Flight finds Cammie navigating life at her new school, armed with an envelope with her estranged mother's address on it. Unsure if she can trust her new friend, Nessa, Cammie enlists her help in tracking to help track her mother down. Will Cammie finally learn why she was abandoned and be able to start her new life? Or will she find too many secrets to count, and realize that she might never put the past behind her?

A heartfelt coming-of-age story, Cammie Takes Flight explores the values of perseverance, unlikely friendships, and what it means to be a family.

Laura Best has had over forty short stories published in literary magazine and anthologies. Her first young adult novel, Bitter Sweet, was shortlisted for the Geoffrey Bilson Award for Historical Fiction for Young People. Her middle grade novel Flying with a Broken Wing was named one of Bank Street College of Education's Best Books of 2015, and it's follow-up, Cammie Takes Flight, was nominated for the 2018 Silver Birch Award. Her most recent middle grade book, a prequel to the Cammie series, The Family Way, will be released in Spring 2021. Her first novel for adults, Good Mother Don't, was published in 2020. She lives in East Dalhousie, Nova Scotia, with her husband, Brian. Visit laurabest.wordpress.com

Cammie Takes Flight, the sequel to Flying with a Broken Wing, can easily be read as a stand-alone. Cammie, the tough, sight-impaired, eleven-year-old has left the small town of Tanner, Nova Scotia and is attending the Halifax School for the Blind. She feels out of her depth as she makes new friends and a few enemies. The author once again has created a determined young girl on a quest to find the mother who gave her up as a baby to be raised by her bootlegging Aunt Millie. Cammie doesn’t always make the best decisions as she tries to figure out the mysteries of her life. She learns a lot about life and herself in this page turner with many twists and turns. One can’t help but cheer for Cammie with her down-home, no-nonsense approach to life. At one point she says, “You can dress your life up all you want, forget about who you used to be, but getting rid of the past isn’t as easy as taking off your dirty old underwear and kicking it under the bed.” This well-written story about a young person who yearns to be wanted has a satisfying ending, one you won’t see coming. As Cammie says, “Hope doesn’t always make sense, but sometimes it’s the only thing you have!” I highly recommend this feel-good book.

Other titles by Laura Best

This is it, Lark Harnish

A Sure Cure for Witchcraft

A Sure Cure for Witchcraft

Flying With a Broken Wing