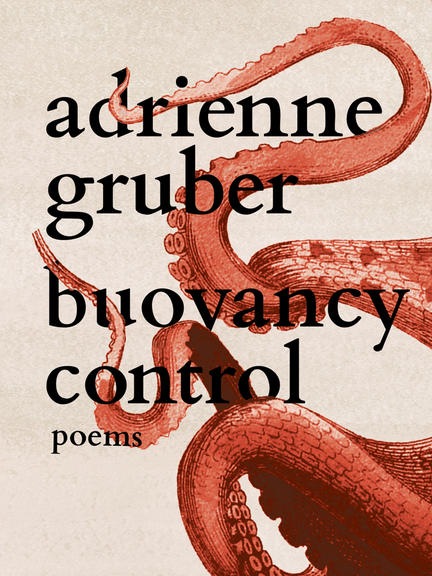 Buoyancy Control, the latest collection of poems from Vancouverite Adrienne Gruber, explores themes of sexuality, sexual identity, and queerness, while confronting the feelings of loss and longing found in relationships, and the chance glimpse into a new life, while still recovering from a painfully failed connection.

Metaphors of oceans, lakes, and other bodies of water, as well as the creatures that inhabit those spaces, swim and swirl their way through Gruber's languid poems, which are divided into two evocative sections. Though distinguished by their own prologue poems, both sections reveal details of the narrator's examination of life, but from two different perspectives: Section 1, Terra Firma, is an exploration of place, of what we consider solid and secure, and how solidity can betray us. In contrast, Section 2, A mari usque ad maria, brings the reader into themes of water and the fluidity of identity, particularly sexual identity and queerness.

This is an honest, at times humorous, and revealing look inside the mind and body of a woman manoeuvring through experiences of longing, loss, and the fluidity of sexual identity, only to come out on the other side a more forgiving being from the journey.

Fans of Karen Solie's powerfully feminist and unapologetic poetic voice, as well as the playful sarcasm and grit of Alison Calder's Wolf Tree, will glory in Gruber's fascinating culmination of land and sea, mind and body, in Buoyancy Control.

Adrienne Gruber is the author of the poetry collection This Is The Nightmare (2008; shortlisted for the Robert Kroetsch Award for Innovative Poetry) and three chapbooks: Intertidal Zones (2014), Mimic (2012; winner of a bpNichol Chapbook Award), and Everything Water (2011). Her work has appeared in numerous literary magazines, including Grain, Event, Arc Poetry Magazine, Poetry is Dead, and Plentitude. She has been a finalist for the CBC Literary Awards in poetry, Descant's Winston Collins Best Canadian Poem Contest, and twice for Arc's Poem of the Year Contest. Her poem "Gestational Trail" was awarded first prize in The Antigonish Review's Great Blue Heron Poetry Contest in 2015. Gruber lives in Vancouver with her partner Dennis and their two daughters. Her new book Buoyancy Control is forthcoming from BookThug in the spring of 2016. Learn more at http://adriennegruber.wordpress.com.

"Adrienne Gruber's Buoyancy Control is a book about water that's really a book about bodies - what they are capable of together and on their own. Moving through lakes and oceans to dreamier, less literal spaces, these poems, like their subject matter, are playful and dark in equal measure." --Emma Healey, The Globe and Mail

Other titles by Adrienne Gruber

This Is The Nightmare

Adrienne Gruber: Reasons to Choose the Octopus As Your Lover

From her collection, Buoyancy Control, comes the most tantalizingly titled poem ever....

On the Road With the League of Canadian Poets

The LCP creates a list for us along their National Poetry Month theme.