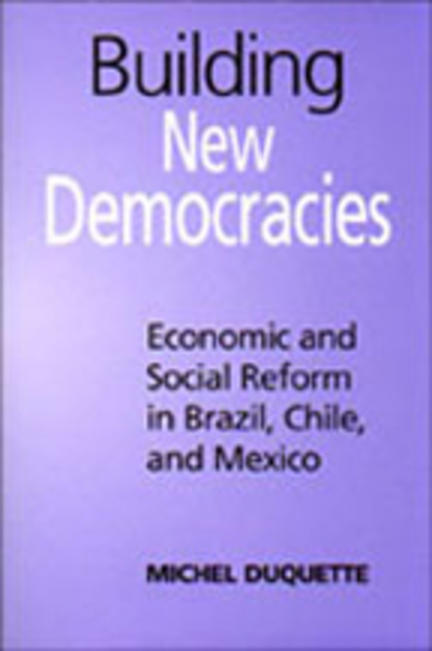 In Building New Democracies Michel Duquette analyses the main public policies of Brazil, Chile, and Mexico to explore examples of how countries make the transition from an authoritarian regime to a democratic society.

The main objective of the book is to follow the process of policy formation in very young democracies. Duquette isolates the specific problems that surround decision-making in a transitional government, showing how legislating structural change does not guarantee democratic success. He offers a general model of domestic and international policy-making as a response to the problems of achieving fundamental political reform. The effectiveness of public policies depends on factors including competing ideologies, inexperienced political leaders, rising political organizations, rule by coalition parties, and the influence of local politicians and technocrats. It is with the alliance of grassroots organizations and autonomous institutions, Duquette believes, that social and economic exclusion will be overcome on a national level. Building New Democracies is primarily theoretical in its analysis, but integrates many recent empirical findings from a wide body of international and Latin American research, including the author's own field work.

The methodology Duquette employs is genuinely comparative and not merely a juxtaposition of case studies. His approach and conclusions can be applied to a number of disciplines, including political science, economics, sociology, and Latin American studies.

Michel Duquette is a professor in the Department of Political Science at l`Universitè de Montrèal.

Other titles by Michel Duquette

Collective Action and Radicalism in Brazil