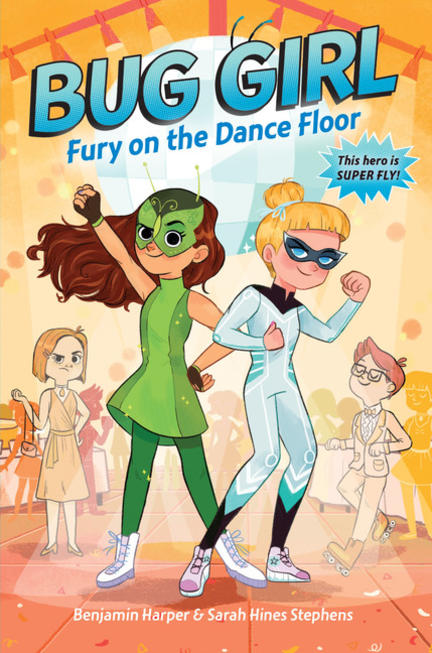 Being a superhero isn’t easy. But surviving a middle school dance? That’s when things get really hard…

Amanda Price never dreamed she’d turn into Bug Girl, a hero with the powers of the insect kingdom. She also never dreamed it would be this difficult.

Turns out superpowers aren’t much help with Geri, the new bully terrorizing the seventh grade. Or with Emily. She’s supposed to be Amanda’s partner in crime-fighting, but she’s too busy freaking out about the upcoming dance.

When a mystery monster appears in town and seventh graders start disappearing, Bug Girl needs Emily's help more than ever. Soon both girls are tangled in a dastardly scheme—and the fate of their school, their town, and their very lives will be decided on the dance floor.

"Told in the third person primarily from Amanda's perspective, the hijinks and variety of comical ne'er-do-wells combine to make a case that envy may be the most venomous evil of all.This entomological adventure celebrates teamwork and girl power." —Kirkus Reviews

Anoosha Syed is a Canadian freelance illustrator and character designer, based in Mississauga, Ontario. She graduated from Ceruleum; Ecole d'arts Visuels in Switzerland and currently works with Industrial Brothers as a character designer on an animated series. She finds inspiration for her art from mid-century design, animation, outer space, forests, japanese kawaii culture and vintage children books.

Other titles by Benjamin Harper

Other titles by Sarah Hines Stephens

Other titles by Anoosha Syed

Monster and Boy: The Sister Surprise

That's Not My Name!

How I Did It