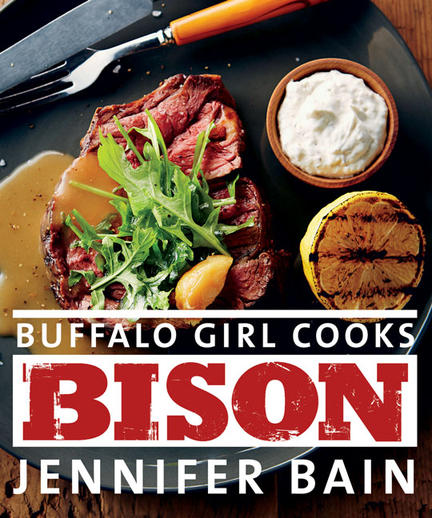 Buffalo Girl Cooks Bison is the first comprehensive contemporary bison cookbook for a general North American market. With more than 100 well-tested, delectable recipes, Bain ensures that you’ll have plenty of culinary inspiration for every cut of bison.

Bison are primarily grass-fed as well as hormone and antibiotic free. And their meat is naturally lean and high in protein, iron, and omega-3 essential fatty acids.

In Buffalo Girl Cooks Bison, you’ll also meet prominent bison ranchers from all over the United States and Canada who share their rowdy and riotous adventures. They champion “ethical carnivorism”: meeting what you eat, caring about how an animal is raised, and being respectful enough to eat every available part.

Jennifer Bain is an award-winning food writer and food editor at the Toronto Star. She is the author of Toronto Star Cookbook: More than 150 Diverse and Delicious Recipes Celebrating Ontario, which was shortlisted for an International Association of Culinary Professionals award. She divides her time between Toronto and her ranch on the Alberta prairies.

"This book makes for a fascinating read – it’s a cookbook you will have a hard time putting down. Parts of it read like an adventure story, parts of it like a history book. The recipes are more than just recipes – they are tributes to a majestic animal that deserves more 'air time' in the kitchens of Canada...Bain has done herself and her herd proud in producing this guide to all things bison." —RecipeGeek.com

"Reviewing the 100-plus recipes in this photo-rich 240-page book, it’s clear that [Bain] has discovered delicious ways to cook [bison] ... she has smartly divided the book into user-friendly chapters dedicated to [specific cuts] and provides dishes for every season." —Times Colonist

"A surprisingly diverse creation ... it is a cookbook, but it’s also a compelling history text, and a selection of stories about bison." —The Edmonton Journal (includes recipe)

The Test Kitchen at Canadian Living was inspired by Buffalo Girl Cooks Bison to try a few recipes. The Tallest Poppy's Pulled Bison "was very good, the flavour was similar to beef, but taken up a notch. Someone in the Test Kitchen evenreferred to it as 'a stampede of flavour.'" —Canadian Living (includes recipe)

The Toronto Star shared an excerpt and recipes from Buffalo Girl Cooks Bison.

The Buffalo Girl provides some background on the animal that inspired her and shares a delicious recipe in a guest post for Slow Food USA.

Jennifer Bain addresses the buffalo/bison name debate and how delicious it is, no matter what you call it, in a guest post for Slow Food in Canada.

Buffalo Girl Jennifer Bain is featured in a Country Guide article that touches on her Saucy Lady column, her cookbook, and her test kitchen at the Toronto Star."

Other titles by Jennifer Bain