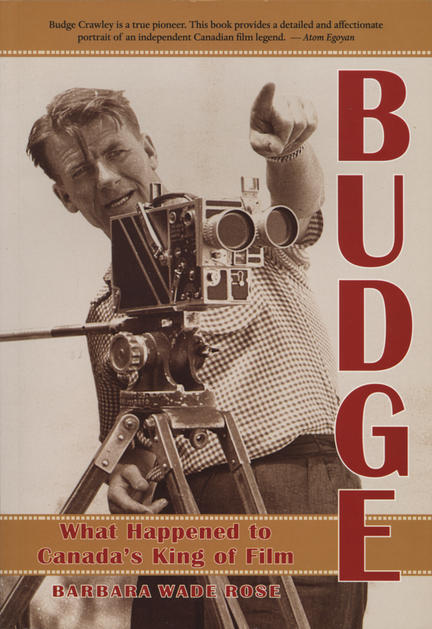 A pioneer who started his own film studio before the National Film Board, Budge Crawley all but dominated the early years of the Canadian Film Awards. He was a one-man industry who hated government handouts; a filmmaker who won Canada its first feature-film Academy Award in 1976. A dynamic, vigorous, infuriating man who loved two wives and a girlfriend, occasionally at the same time, Budge Crawley was Canadian cinema. In Barbara Wade Rose's account of the man and the moxy, Budge: What Happened to Canada's King of Film, she recounts Crawley's successes — and his failures. At sixteen he picked up his first camera and focused on Canada, creating a multitude of portraits of his country that were judged among the best amateur films in the world. In 1939 Budge and his first wife, Judy, formed Crawley Films, one of North America's biggest studios outside of Hollywood, made some 5,000 films, and won over 270 international awards. As a documentarian he was an internationalist, a schemer who beat out producers half his age for the rights to the life story of Janis Joplin by quoting Bible scripture to her fundamentalist mother. He seized from the hands of a Hollywood editor film footage about a fiasco of an expedition that would become his most famous, Oscar-winning documentary, The Man Who Skied Down Everest. By the 1970s, as Canada's film industry grew around him, Budge Crawley was recognizably Canada's movie maverick; he fought for quality films and often broke the rules. In the end, his story was as dramatic as his profession: Budge and the fortunes of film itself brought to a crashing climax his company, his relationships, and the one great Canadian movie he swore he intended to finish.

Barbara Wade Rose writes features and columns on a variety of subjects for the "Globe and Mail," "Saturday Night," and "The New York Times." Her investigative writing has won a National Magazine Gold Award and a Science in Society Journalism Award. She li