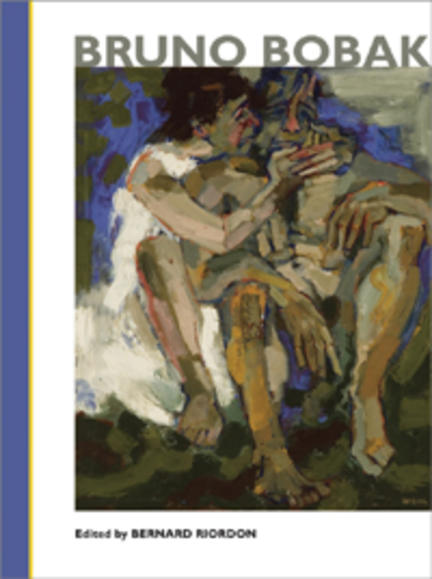 Bruno Bobak became a professional artist before he was 20 years old, and more than 60 years later, his work remains vibrant and in demand by public galleries and collectors in North America and Europe. Bruno Bobak: The Full Palette celebrates his life and work. Five authors present Bobak's life and artistic development, stage by stage. Herb Curtis, a novelist and essayist, outlines the artist's early years in Hamilton, Ontario. Laura Brandon, curator of War Art at the Canadian War Museum , describes Bobak's development as a War Artist, and internationally renowned painter, print-maker, and educator Gordon Smith recalls Bobak's formative decade in Vancouver. Marjory Rogers Donaldson, a painter and portraitist, portrays the richness of Bobak's mature years in Fredericton, and independent curator Roslyn Rosenfeld examines the remarkable depth and range of Bobak's drawings and prints. Introduced by Herménégilde Chiasson, the author and artist who is Lieutenant-Governor of New Brunswick.

Herb Curtis (b. 1949) has lived all his life in New Brunswick; he moves between Fredericton and the Miramichi, where he guides visiting salmon fishermen. His masterpiece, The Brennan Siding Trilogy (Goose Lane, 1997), is a compilation of his first three novels, The Americans Are Coming (1989, 1999), The Last Tasmanian (1991, 2001) and The Lone Angler (1993). A different version of "The Party" appears in The Last Tasmanian.

Laura Brandon is the Curator of War Art at the Canadian War Museum in Ottawa. She has written extensively on war art and Canadian art history. Peg by Herself, her groundbreaking biography of war artist Pegi Nicol MacLeod, was published in 2005 and her award-winning exhibition, Canvas of War, toured Canada from 2000-2004.

Gordon Smith is a Vancouver painter and printmaker whose international reputation rests on his abstracted images of the Canadian landscape. His work can be found in New York’s Museum of Modern Art, the Smithsonian, and the National Gallery of Canada.

Marjory Rogers Donaldson is a painter and portraitist associated with the University of New Brunswick Art Centre since 1945. She worked as assistant director of the Art Centre under Bruno Bobak and later as its director. In 1991 she received the Award of Merit Citation from Association of Museums, New Brunswick.

Roslyn Rosenfeld taught art history for a dozen years at the Saint John and Fredericton campuses of the University of New Brunswick. She has published reviews in Fuse and over forty reviews and features in ArtsAtlantic. She has also curated or written essays for eighteen exhibitions.

Herménégilde Chiasson has been called "the spokesperson and conscience of the young Acadian poetry." His poetry has been nominated for and won the Governor General's Award and twice won the Prix France-Acadie. In 1990 the French government named him a Chevalier des Arts et des Lettres. Herménégilde Chiasson studied visual arts at Mount Allison University, Université de Moncton, and New York University, and received his PhD from the Sorbonne. He has produced some 15 films, written 20 plays, and exhibited his paintings and photographs in galleries in the Maritimes, Toronto, and internationally. In 2001, Chiasson was one of a select group of artists chosen to accompany Governor General Adrienne Clarkson to South America. This special state visit was organized to foster new cultural and social links between Canada, Chile and Argentina.

"An engrossing look." — Globe and Mail

"My candidate for the Canadian art book of the year." — George Fetherling

Other titles by Bernard Riordon

Other titles by Herb Curtis

The Americans Are Coming

Other titles by Laura Brandon

Other titles by Gordon Smith

Other titles by Roslyn Rosenfeld

Even Stones Have Life

Other titles by Herménégilde Chiasson

To Live and Die in Scoudouc

Books of the public galleries of Canada