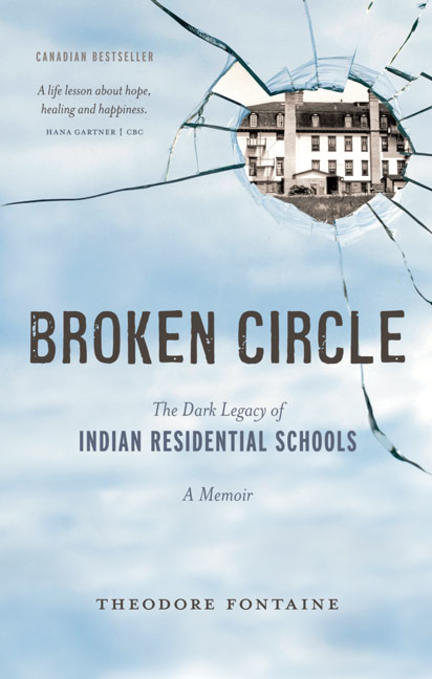 Now an approved curriculum resource for grade 9–12 students in British Columbia and Manitoba.

Theodore (Ted) Fontaine lost his family and freedom just after his seventh birthday, when his parents were forced to leave him at an Indian residential school by order of the Roman Catholic Church and the Government of Canada. Twelve years later, he left school frozen at the emotional age of seven. He was confused, angry and conflicted, on a path of self-destruction. At age 29, he emerged from this blackness. By age 32, he had graduated from the Civil Engineering Program at the Northern Alberta Institute of Technology and begun a journey of self-exploration and healing.

In this powerful and poignant memoir, Ted examines the impact of his psychological, emotional and sexual abuse, the loss of his language and culture, and, most important, the loss of his family and community. He goes beyond details of the abuses of Native children to relate a unique understanding of why most residential school survivors have post-traumatic stress disorders and why succeeding generations of First Nations children suffer from this dark chapter in history.

Told as remembrances described with insights that have evolved through his healing, his story resonates with his resolve to help himself and other residential school survivors and to share his enduring belief that one can pick up the shattered pieces and use them for good.

Theodore led a mineral exploration crew in the Northwest Territories for a global mining corporation, was chief of the Sagkeeng First Nation from 1979 to 1981, and has worked for the federal Secretary of State Department and the Northwest Territories Region of Indian and Northern Affairs Canada. He was executive director of the Assembly of Manitoba Chiefs and served as a strategic advisor to the chiefs on Indian residential school issues. He was instrumental in negotiating and finalizing the national employment equity settlement with national corporations and the Canadian Human Rights Commission.

Theodore is currently a director on the board of Peace Hills Trust, a national financial institution serving Aboriginal and non-Aboriginal businesses across Canada, and is an end-of-life volunteer with the Manitoba Hospice and Palliative Care Association. He previously served on multiple boards and faculties including the Indigenous Leadership Development Institute, the Manitoba Museum, the Banff Centre of Management, and the Victorian Order of Nurses (VON). Ted lives with his wife, Morgan, in Winnipeg, Manitoba.

p class=review_text> “First and foremost, Broken Circle is a reflection of Ted’s courage. It is also a hopeful, inspirational story that will give courage to other residential school survivors. It will show them that they’re not alone and that these unique stories are a part of Canadian history that should be told. Above all, Broken Circle is about healing and reconciliation. It makes its point, but there’s nothing vindictive about it. Lovely.” —Phil Fontaine, former National Chief of the Assembly of First Nations, owner/operator of Ishkonigan Consulting & Mediation

“This is an important book to share when helping students understand what it was like to live in residential schools. Broken Circle also offers a significant model of a true story about hope and healing.” —#WeHaveDiverseBooks Catalogue, Association of Canadian Publishers

p class=review_text>“Canadians who advise survivors of Native residential schools to “just get over it,” should read Broken Circle: The Dark Legacy of Indian Residential Schools. . . . If the key to successful communication is showing, not telling, a story, Ted Fontaine succeeds completely in demonstrating from his own experience how damaging the “dark legacy” of residential school can be. His story’s upbeat ending also serves as an inspirational example of the lucky minority of survivors who, with help and determination, triumph over that malignant inheritance.” —Jim Miller, BC Studies

p class=review_text>This is a story of healing. Fontaine’s first-person account balances difficult memories with an affirmation of pride in his aboriginal heritage. It is in turns heartbreaking and touching, but invaluable for the light it sheds on a dark period in Canadian history. —TechLife Magazine

p class=review_text>“Too many survivors of Canada’s Indian residential schools live to forget. Theodore Fontaine writes to remember. It’s taken a lifetime to make peace with the pain, shame and fear inflicted upon a little boy wrenched from his family when he was only seven. Ted hasn’t forgotten, but he has forgiven. This is what makes his voyage of self-discovery so compelling. This memoir is a life lesson about hope, healing and happiness.” —Hana Gartner, CBC’s The Fifth Estate

p class=review_text>“Broken Circle takes readers by the hand and walks us through the lonely corridors of Fort Alexander Indian Residential School. Mr. Fontaine discloses how the trauma he suffered as a result of his incarceration in Canada’s Indian residential school system has affected him throughout his life. What I find remarkable about his memoir is the generosity, bravery and open-heartedness with which he shares these sometimes joyous, sometimes painful moments of his life. Ultimately these memories aid him in his personal journey of victory over the enduring legacies of Canada’s church-run, government-funded institutions of genocide. In the spirit of reconciliation, Mr. Fontaine brings us to his own healing. And in this way he has added to the healing of us all.” —Kevin Loring, author of Where the Blood Mixes

p class=review_text>“Theodore Fontaine has written a testimony that should be mandatory reading for everyone out there who has ever wondered, 'Why can’t Aboriginal people just get over Residential Schools?' Mr. Fontaine’s life story is filled with astonishing and brutal chapters, but, through it all, time, healing, crying, writing, friends and family, and love—sweet love—have all graced their way into the man, father, son, brother, husband, and child of wonder Theodore has always deserved to be. What a humbling work to read. I’m grateful he wrote it and had the courage to share it. Mahsi cho. —Richard Van Camp, author of The Moon Of Letting Go

“Fontaine shares his healing journey with grace, insight and respect for where his story ends and another’s begins. His story will speak strongly to any child or parent; his language and imagery are simple, honest and shatteringly relatable. The opportunities for critical thinking are rich, specifically regarding the complex impact of residential schools on individuals, families, communities and Canada as a nation.”

p class=review_text>“If you believe, as I do, that knowing our past can help us make positive changes in our future, read this book . . . [Theodore] is doing a remarkable service for First Nations, but also helping non-Aboriginal people see the destructive impact of residential schools.” —Rosa Walker, President and CEO, Indigenous Leadership Development Institute, Inc.

p class=review_text>A poignant and powerful story that will help Canadians understand why the residential school system had such a devastating effect . . . ultimately, it is a hopeful and victorious story, as Fontaine found a way through his pain and came to terms with what he saw as “an overwhelming anger” at his parents for abandoning him . . . Broken Circle allows readers to understand that the residential school experience, while damaging to the culture, language, history and beliefs of aboriginal people, is a human story. —Rocky Mountain Outlook

p class=review_text>Fontaine has crafted a book that will foster understanding and empathy, as it implicitly asks all readers to examine their own views on this tragic period in our history. —Winnipeg Free Press

Kaleigh Bradley on how the legacy of residential schools continues to ripple throughout Indigenous communities, and what must be done.