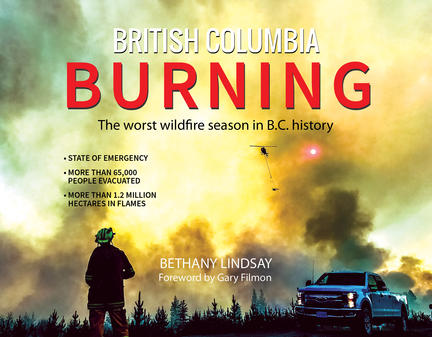 More of British Columbia had gone up in smoke in eight days in July 2017 than during the entire 2016 season. It was a year for the record books. By the time the flames were finally extinguished, 2017 ranked as the worst wildfire season in British Columbia history.

As early as July 7, the province declared a state of emergency as separate fires raged across the province. By the end of the summer, more than 65,000 people had been forced to leave their homes and wildfire smoke was choking the air as far away as Victoria and Saskatchewan. In British Columbia Burning, Bethany Lindsay uses words and images to follow firefighters, evacuees and those who stayed to save their communities in this unforgettable wildfire season.

Bethany Lindsay is the author of British Columbia Burning. She has worked for The Vancouver Sun, and CTV, and has reported internationally for The Cambodia Daily in Phnom Penh. She currently writes for CBC News and lives in Vancouver.

"VIVID AND ENGAGING"
"A vivid and engaging look at a summer of unprecedented wildfires, British Columbia Burning takes the reader inside the communities that were forced to flee the flames. Bethany Lindsay applies her considerable journalistic talents to analyze the province's response and detail a plan to improve in the future. An important book that everyone should read." — Rob Shaw, co-author, A Matter of Confidence: The Inside Story of the Political Battle for B.C.

"MUST-READ"
"Bethany Lindsay's vivid descriptions of the 2017 B.C. wildfires paint a powerful picture of the risks that come with a warming world. The reader experiences the plight of those affected by these fires, hears the analyses of the scientists studying their cause, and stands side-by-side with the firefighters battling the blaze. This book is a must-read for Canadians seeking to better understand the impact of a changing climate on our natural world." — Warren Mabee, director, Queen's Institute for Energy and Environmental Policy, Queen's University

"BEAUTIFULLY TOLD"
"Urgent and beautifully told, this is a story of how British Columbia may be facing a future of increasingly epic wildfires. It is not only good reading, but also contains vital information about how climate change is altering our world and what the province is doing to prepare." — Linda Solomon Wood, founder and editor-in-chief of the National Observer

"ENTERTAINING AND INFORMATIVE"
"Last summer's devastating fire season was definitely one for the history books — it destroyed the most territory, saw the single largest fire in B.C.'s history and held the province in a state of emergency for more than two months. This book is both entertaining and informative — it's a quick read, chock full of research, statistics and human stories." — Linda Solomon Wood, founder and editor-in-chief of the National Observer

"INTELLIGENT"
"This book is wonderfully illustrated and intelligently organized to highlight the impacts on us humans. It's a must-read on the all-too-real effects of human-induced catastrophic climate change." — Peter Grant

Other titles by Bethany Lindsay

The Ultimate Book of Lists