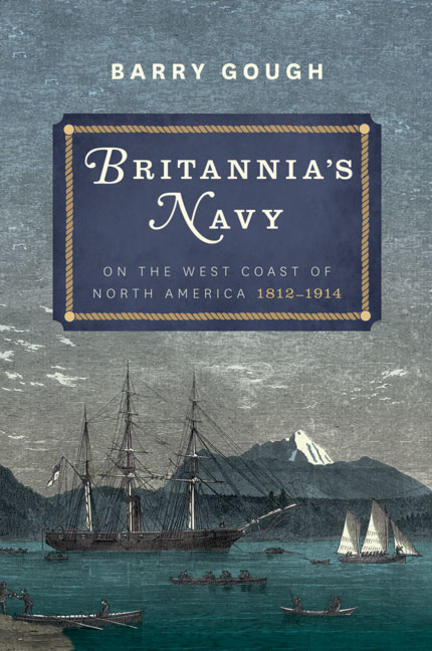 “[Gough’s] research…has been thorough, his presentation is scholarly, and his case fully sustained.”—The Times Literary Supplement

The influence of the Royal Navy on the development of British Columbia and the Pacific Northwest was both effective and extensive. Yet all too frequently, its impact has been ignored by historians, who instead focus on the influence of explorers, fur traders, settlers, and railway builders. In this thoroughly revised and expanded edition of his classic 1972 work, naval historian Barry Gough examines the contest for the Columbia country during the War of 1812, the 1844 British response to President Polk’s manifest destiny and cries of “Fifty-four forty or fight,” the gold-rush invasion of 30, 000 outsiders, and the jurisdictional dispute in the San Juan Islands that spawned the Pig War. The author looks at the Esquimalt-based fleet in the decade before British Columbia joined Canada and the Navy’s relationship with coastal First Nation over the five decades that preceded the Great War.

Dr. Barry Gough, one of Canada's foremost historians, is a Fellow of the Royal Historical Society, Fellow of King's College London and Life Member of the Association of Canadian Studies, and has been awarded a Doctor of Letters for distinguished contributions to Imperial and Commonwealth history. He is well recognized for the authenticity of his research and the engaging nature of his narratives, and is the author of many critically acclaimed books, including Fortune's A River: The Collision of Empires in Northwest America (Harbour, 2007), which won the John Lyman Book Award for best Canadian naval and maritime history and was shortlisted for the Writers' Trust Non-Fiction Prize. Gough has been writing for almost four decades. He lives in Victoria, BC, with his wife, Marilyn.

“I strongly recommend this book to your attention: it fills large gaps in the literature, and it brings together the wide range of scholarship that has a bearing on nineteenth century naval activities in the Pacific.”

“Britannia’s Navy updates and enhances a classic that shaped the study of imperial maritime peripheries. The new edition develops the role of the British captains and admirals who commanded the station, and the critical relationship they had with London policy makers at the foreign and colonial offices, which shaped local policies and their relation with Britain’s global economic and strategic position. The Royal Navy played a critical role in the development of British Columbia, from securing borders with the United States to promoting economic activity, and has left an indelible legacy on Canada’s west coast.” —Andrew Lambert, Professor of Naval History, King’s College, London

“Barry Gough’s formidable sweep through a century of British naval and imperial penetration of the northwest coast of North America displays on every page the peerless mastery of an author who has contemplated his topic for most of his adult lifetime. The book is not a naval history; it is a geopolitical study of what Alfred Thayer Mahan characterized as “sea power” and what Barry Gough much more cogently defines as “the pursuit of power and the pursuit of profit, in equal measure.” This prolonged British thrust for dominance in the North Pacific would today be encompassed within the phrase 'globalization.' The author eloquently describes in detail, breadth, and with awe how this goal was sought and achieved by a distant island nation in the face of competition by the sprawling and avaricious United States. Read and savor this book to understand the Anglo-American past in the Pacific and what it means for today and tomorrow.” —Kenneth J. Hagan, Professor and Museum Director Emeritus, US Naval Academy Captain, US Naval Reserve (Ret.)

“In this book, Professor Barry Gough has told the enthralling story of how the Royal Navy created, developed, and sustained its Pacific station, which became the largest in the British Empire during the nineteenth century. These far-sighted actions not only developed the Esquimalt naval base but they also secured the settlement of British Columbia in the face of threats from Russian territorial expansion, American “Manifest Destiny,” encroachment, gold prospectors from California, and Fenian filibusterers. This book is a stimulating product of Gough’s fifty years of work as an historian deeply involved in British and Canadian naval traditions.” —William S. Dudley, PhD, former Director, US Naval Historical Center

“It is rare that we have the pleasure to experience British Columbia’s history from the water, but now can do so, thanks to the consummate naval historian Barry Gough. To travel the tumultuous 19th century up and down the coast with the Royal Navy is a treat indeed. Whether we are a weekend boater or a history, geography, or naval buff, this robust account of men in boats is engaging and provocative." —Jean Barman, Professor Emeritus, Department of Educational Studies, University of British Columbia

“an approachable, engaging, and informative text, well deserving of a first or second appraisal.”

“In this massively re-written and expanded version of Britannia's Navy on the West Coast of North America, the accomplished naval historian Barry Gough has turned a small classic of 1971 into a major scholarly work of 2016. The newer chapters, and especially the newer, extended archival notes, will impress every professional historian—Gough's command of the sources is remarkable. This vast region of the Northern Pacific, and the Northwest Coast of Canada, has now been brought into the larger story of British naval mastery in the nineteenth century. This is an invaluable work." —Paul Kennedy, Dilworth Professor of History, Yale University, and author of The Rise and Fall of the Great Powers and The Rise and Fall of British Naval Mastery

“Barry Gough is one of the world's predominate scholars of the Royal Navy and the leading scholar on the Navy's role on the Pacific frontier. This classic is an absolute must for the library of anyone interested in the maritime and naval history of the Northwest Coast and the wider Pacific." —James Delgado, PhD, past Director, Vancouver Maritime Museum

Other titles by Barry Gough

A Historian's Journey into the Past of Clayoquot Sound

The titans at the Admiralty who fought the First World War

From Classroom to Battlefield

The Soldier, Fur Trader and Explorer Who Opened the Northwest

Voyages in the Waterway of Forgotten Dreams

In Search of the Visible Past

The Collision of Empires in Northwest America

Papers of the second Laurier Conference on Ethnohistory and Ethnology