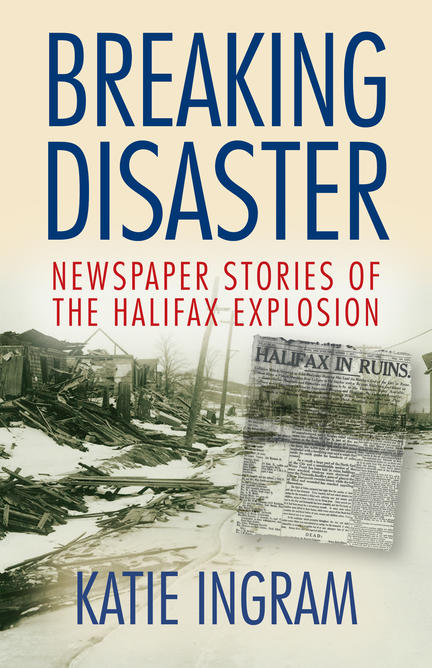 "The rumble got louder, the walls quaked as if in fear, and the classroom's windows started to pulse and shake before they completely shattered, showering everyone inside with glass."

On December 6, 1917, the face of Halifax changed forever when the Imo, a Belgian Relief ship, collided with the French ship, the Mont Blanc. Shortly after 9:00 a.m., the Mont Blanc, which was carrying a large cargo of explosives, blew up. It destroyed much of the city's north end and neighbouring communities like Tuft's Cove and Dartmouth. The effect was catastrophic.

Almost immediately, aid was rushed to Halifax as survivors and workers dug through rubble and ruins for friends and family. Over 2,000 people died and 9,000 were injured, while countless others were rendered homeless. As news broke about the explosion, newspapers from Toronto to Hawaii and France to Australia scrambled to provide readers with updated information.

These and other stories gave face to a disaster which, at the time, was a mix of ever-changing statistics, details, and questions about blame. Often the reports were exaggerated and erroneous. In Halifax, newspapers carried lists of the injured, dead, and missing alongside a collection of notices and ads. This strange juxtaposition showed just how quickly the explosion had happened as holiday-themed advertisements mixed with notices about relief and stories of survival and death. Together, they present the overarching image of Halifax at the time--survival and confusion--while separately they show just how much impact one event had.

In Breaking Disaster, Ingram traces these details and stories as she pieces together the different narratives from the week that followed December 6, 1917, many of which have long faded into the larger story of the Halifax Explosion.

Born in Halifax and raised in Liverpool, Nova Scotia Katie Ingram has been telling stories ever since she learned to talk. She received a Bachelor of Arts from Dalhousie University in 2010 and a Bachelor of Journalism from the University of King’s College in 2011. She now lives in Halifax where she works as a freelance journalist and writing tutor and is never too far from a good cup of tea.

Other titles by Katie Ingram

100 Years Since the Halifax Explosion