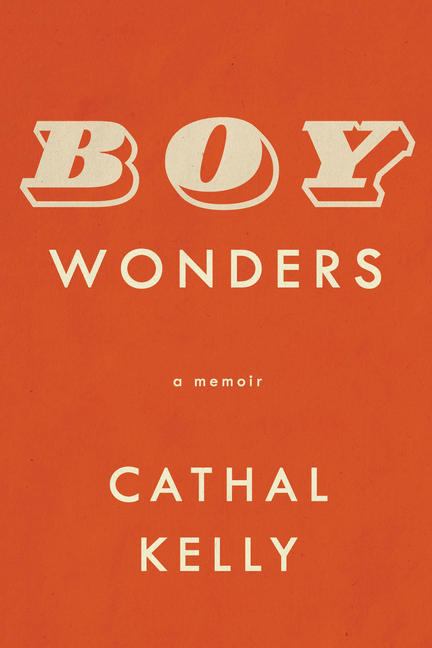 "The most fascinating things about life are the banalities we so rarely discuss amongst ourselves but that we devote most of our energies to navigating. How did that day you've forgotten look? What did it feel like? Were you lonely? Did you have the sense you were progressing anywhere? Probably not. Yet string a few thousand of them together and that's a life." —From Boy Wonders

Cathal Kelly grew up in the seventies and eighties, decades when dressing like Michael Jackson seemed like a good idea and The Beachcombers—"an adventure show about logging"—seemed to make sense. But apart from fashion missteps and baffling TV plotlines, Kelly's youth was a time of wonder, obsession and discovery. Navigating an often fraught fam­ily life, Kelly sought refuge in books, music, movies, games and at least one backyard hole. However, looking back he sees that his passion for George Orwell, Star Wars or The Smiths was never just about the book, movie or band. Rather, it was about the promise each new experience offered him in making sense of the world, and how he might find a home within it.

By turns funny, elegiac and insightful, Boy Wonders is an unvarnished celebration of grow­ing up and stumbling toward identity. It's about the good and the bad of those brief years when we find purpose without end, obsession with­out limit and joy in the strangest of places.

Cathal Kelly is a national sports columnist at The Globe and Mail.

Into my late twenties, I carried around a series of diaries listing every book I’d ever read—how many pages it contained, when it had been started and finished, and a mark out of five stars. I loved reading, but I got a special thrill from being able to pad the list.

Life is not orderly, but a list can make it so. As you change, so do your lists.

I no longer believe that The Breakfast Club is one of the ten best films ever made. But there was a younger version of myself who did. An astrophysicist once told me, “You cannot properly consider a system of which you are a part.” (It’s one of the Top 20 Aphorisms I’ve Encountered in Conversation.)

So while I remember the iteration of myself who thought Molly Ringwald dancing on a staircase and Emilio Estevez talking about ripping the hair off some guy’s ass was right up there with La Règle du Jeu, I’m not sure I would recognize him now.

However, I can make certain assumptions about him because I have the list as a reference point. If the list is long enough, you can make good guesses about someone’s personality and approach. You can tell if this is someone you’d like.

In journalism, lists are considered the lowest form of literature, tucked in behind streeters and notes columns. A list is what you print in August when everyone’s on vacation and you can’t come up with anything better.

I’ve never understood that pervasive opinion. I defy you to read past a list on a printed page. It’s impossible. Because you know that while ten thousand words of explication may tell you nothing about the author, a list can’t help but do so. It lets you flip through the filing system of someone’s brain. It’s a form of mind reading.

It’s my book so I get to inflict just a few of my lists on you.

I apologize in advance if they do not offend you. That was my intention. I’ll try to learn from this and do better in future.

WORST PLACES
1. The middle seat
2. Cleveland after dark
3. Disney World/Land
4. Cleveland in daylight
5. Any hotel room facing a highway
6. O’Hare Airport at Christmas
7. A twenty-four-hour coffee shop between 2 and 5 a.m.
8. The front row at a movie theatre
9. Any lineup for any reason
10. Budapest

OVERRATED EXPERIENCES
1. Picnics
2. Being there
3. Concerts in arenas
4. Canoeing
5. The Louvre
6. Theatre in a park
7. Cross-country skiing
8. Opening night
9. Pop-up anything
10. Cooking over an open fire

Winner of the 2019 Stephen Leacock Medal for Humour

"Cathal Kelly's reporting (for this newspaper) about sports is so entertaining that even if (like this reader) you don't much care about sports, you may regularly read him anyway. His debut memoir, Boy Wonders, about growing up in the 1970s and 80s, promises to be emotional, funny and packed full with nerdy obsessions and ill-advised fashion choices. Also sports." —The Globe and Mail

"The best writers keep a steely grip on their childhood memories and Cathal Kelly is no exception. . . . He is one of Canada's finest sports writers (first at the Star, now at The Globe). He is also a natural storyteller with a deep streak of self-deprecating humour." —Toronto Star

"The quirky, must-read Globe and Mail columnist introduces us to both the boy and the wonder of a memoir that truly is a gem—multi-faceted, colourful, polished, brilliant. . . . Boy Wonders is terrific, a book you should buy, read once for the pleasure, read again for the craft and then . . . give it to a 12-year-old." —Winnipeg Free Press

"What a wondrous treat this book is. Looking back at his childhood, Cathal Kelly takes things that we all recognize—subway trains, Michael Jackson's jacket, bickering families—and spins them into a fascinating and heart-rending web of life and memory. I've always wondered about boys; this book provides many answers, and much pleasure.​" —Elizabeth Renzetti, author of Shrewed

"Cathal Kelly has the gift only first-rate writers have: he knows which obsessions matter most, however much the rest of the world pretends they don't. The result, in Boy Wonders, is a breathtaking portrait of a boy's inner life: lonely, clueless, hilarious and full to the brim with every variety of passion. You will be glad you read it, whoever you are." —Ian Brown, author of Sixty

"This is the book you should be reading if you want to know how complicated boys become grown men. It's not riddled with rules, just gem-like stories, each a beautifully crafted revelation. Whether he's writing about first kisses, pop-culture fandom, broken families or the ambiguities of faith, Kelly masterfully balances the hilarious with the heartbreaking, sometimes in a single sentence. A coming-of-age classic." —Lisa Gabriele, author of The Winters