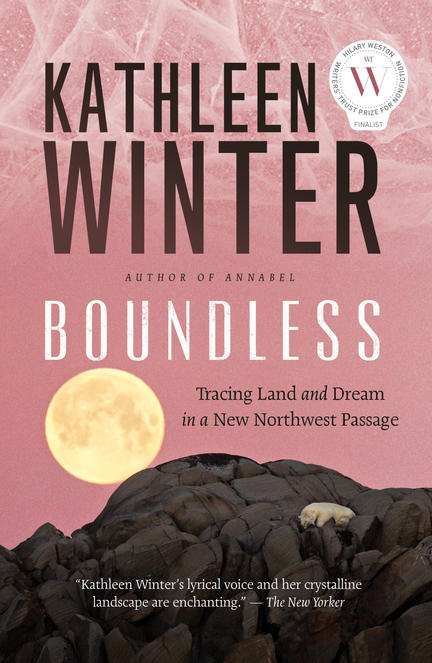 The long-awaited follow up to Annabel and Kathleen Winter’s first work of narrative nonfiction.

In 2010, bestselling author Kathleen Winter took a journey across the storied Northwest Passage, among marine scientists, historians, archaeologists, anthropologists, and curious passengers. From Greenland to Baffin Island and all along the passage, Winter bears witness to the new math of the melting North — where polar bears mate with grizzlies, creating a new hybrid species; where the earth is on the cusp of yielding so much buried treasure that five nations stand poised to claim sovereignty of the land; and where the local Inuit population struggles to navigate the tension between taking part in the new global economy and defending their traditional way of life.

Throughout the journey she also learns from fellow passengers Aaju Peter and Bernadette Dean, who teach her about Inuit society, past and present. She bonds with Nathan Rogers, son of the late Canadian icon Stan Rogers, who died in a plane crash when Nathan was nearly four years old. Nathan’s quest is to take the route his father never travelled, except in his beloved song “The Northwest Passage,” which he performs both as anthem and lament at sea. And she guides us through her own personal odyssey, emigrating from England to Canada as a child and discovering both what was lost and what was gained as a result of that journey.

In breathtaking prose charged with vivid descriptions of the land and its people, Kathleen Winter’s Boundless is a haunting and powerful story, and a homage to the ever-evolving and magnetic power of the North.

Kathleen Winter is the author of the international bestseller, Annabel, which was a finalist for the Scotiabank Giller Prize, the Governor General’s Literary Award, the Rogers Writers’ Trust Fiction Prize, the Orange Prize for Fiction, and CBC’s Canada Reads. Her first collection of stories, boYs, won both the Winterset Award and the Metcalf–Rooke Award. A long-time resident of St. John’s, Newfoundland, she now lives in Montreal.

Compulsively readable . . . it both heightens life and plumbs its deepest mysteries, laying bare the beauty of both the world and the soul.

For the many readers who admired Annabel and want to get to know its author better, Boundless is a tremendous gift.

Her keen novelist’s eye brings immediacy and vibrancy to many of the encounters…fresh and enjoyable.

Winter’s personal reflections on marriage, family, and past relationships, combined with her poetic observations of the Northern geography and people, breathe new energy into the traditional travelogue format.

[Boundless] is a deep book, meditative and thoughtful, but it is also compulsively readable, driven by an inexorable narrative drive and its keen attention to humanity in all its manifold complexities. It is the sort of book one will finish and return to.

This talent has no limit…a beautiful, thrilling ride.

It’s an impressive book, one which belongs alongside the best of writers like Dillard and Terry Tempest Williams, writers who so root their work in themselves and the natural world that the work itself becomes transcendent.

Winter is a confident and engaging stylist, and her treatment of the material is kind and empathetic… For the many readers who admired Annabel and want to get to know its author better, Boundless is a tremendous gift.

Other titles by Kathleen Winter

The Freedom in American Songs