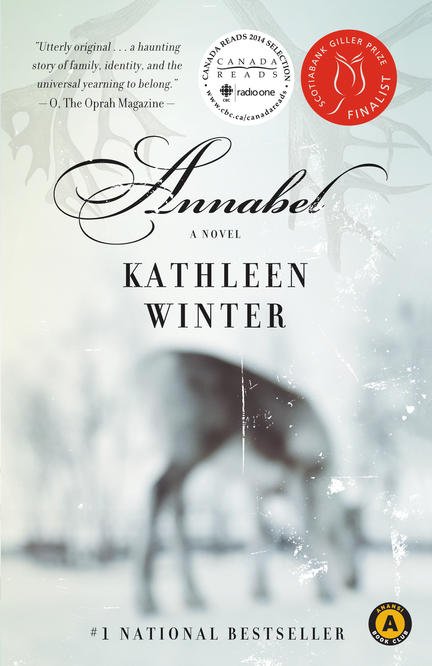 Shortlisted for the Scotiabank Giller Prize, the Governor General's Award for Fiction, and the Rogers Writers' Trust Fiction Prize

In 1968, into the beautiful, spare environment of remote coastal Labrador, a mysterious child is born: a baby who appears to be neither fully boy nor girl, but both at once.

Only three people are privy to the secret — the baby's parents, Jacinta and Treadway, and a trusted neighbour, Thomasina. Together the adults make a difficult decision: to raise the child as a boy named Wayne. But as Wayne grows to adulthood within the hyper-masculine hunting culture of his father, his shadow-self — a girl he thinks of as "Annabel" — is never entirely extinguished, and indeed is secretly nurtured by the women in his life.

Haunting, sweeping in scope, and stylistically reminiscent of Jeffrey Eugenides' Middlesex, Annabel is a compelling tale about one person's struggle to discover the truth about their birth and self in a culture that shuns contradiction.

Kathleen Winter is the author of the international bestseller, Annabel, which was a finalist for the Scotiabank Giller Prize, the Governor General’s Literary Award, the Rogers Writers’ Trust Fiction Prize, the Orange Prize for Fiction, and CBC’s Canada Reads. Her first collection of stories, boYs, won both the Winterset Award and the Metcalf–Rooke Award. A long-time resident of St. John’s, Newfoundland, she now lives in Montreal.

. . . utterly original . . . a haunting story of family, identity, and the universal yearning to belong.

Reminiscent of Jeffrey Eugenides' magnificent 2002 novel Middlesex, Winter's treatment of such a delicate issue is amazing and incredibly engaging. Her novel is written with immense sensitivity and grace, not to be missed.

A book like this, its topic and beautiful language, the unrelenting sorrow, Winter's insightful characterizations and utter sensitivity, is difficult to do justice to with these few words. I simply want to tell people: read this book. Read it though you know little or nothing about its subject or the author. It will open you up. It will change you.

There is a haunting beauty to Winter’s depictions of the natural world.

Annabel's strength lies in probing the dilemma of sexuality and self-knowledge. I have never read such an intimate portrait of a person struggling to live inside a self that the world sees as a dreadful mistake.

. . . Annabel is a novel about divisions, not only between the sexes but also between social classes and, perhaps most crucially, ways of being . . . Winter does a deft job of developing all the characters fully and making their motives understandable . . . It's to Winter's credit that both the fear and the beauty are given vivid expression in this finely crafted novel.

It’s this complexity of vision, this refusal to accept false absolutes that makes Annabel such a stunning novel...

Put "Annabel" right at the top of your summer reading list, and save it for a day when you have several lazy hours to live in its world.

Annabel is a beautifully sensitive novel, populated with realistic characters and lit by a powerful sense of place. It deserves multiple readings, as its sensibility, the richness of its description and its sheer honesty grip the heart.

Wayne proves a compelling narrator . . . you are going to choke up, don't even try not to. [. . .] The truth is, none of us knows what any of us is going to turn out like, and that's always a story worth telling.

Read it because it's a story told with sensitivity to language that compels to the last page, and read it because it asks the most existential of questions. Stripped of the trappings of gender, [Kathleen] Winter asks, what are we?

Annabel is an unforgettable novel of struggles, personal and inter-personal, and Winter's empathetic voice does them justice in a way that connects reader to story. Destined to be one of the biggest novels out of Newfoundland this year, this is a story of isolation and a communication breakdown that breaks a family down, and breaks the reader down along with them.

Annabel is a stunning and stirring debut that signals the long-overdue arrival of a literary talent.

This is a remarkable first novel, an accomplished debut by an exciting new voice with a confident, mature style.

[Kathleen Winter's] lyrical voice and her crystalline landscape are enchanting.

Winter's dazzling debut addresses the riddle of gender and the tragedy of conformity with astonishing insight and eloquence.

...a stunning novel, one of the rare kind that might well imbed itself permanently in a reader's psyche.

The Montreal-based Winter, a native of Newfoundland, possesses a rare blend of lyrical brilliance, descriptive power and psychological and philosophical insight...A compelling, gracefully written novel about mixed gender that sheds insight as surely as it rejects sensationalism. This book announces the arrival of a major writer.

. . . a captivating romantic novel with a happy ending.

Winter has written an ambitious first novel set in a little-known corner of the country and peopled by memorable guides.

Annabel offers some hard themes for readers. It is the story of an intersex child born in a remote coastal Labrador village in 1968. Primarily, I feel, Winter has written an homage to self-determination and self-preservation. An intersex child is born with atypical reproductive anatomy – both male and female anatomy are present. Advocates for intersex infants argue against surgical alterations of gentalia and reproductive organs being performed in order to accommodate societal expectations of what it means to be male or female in the world. This choice forms the centre of Winter’s novel.

Jacinta Blake gives birth, in her bathtub, at home. Her closest friend, Thomasina, is assisting with the birth. Thomasina is the first one who notices the baby has both male and female genitals. She immediately begins to refer to the child as Annabel, in tribute to her own daughter who has recently died. Jacinta’s husband, Treadway, feels strongly the child should be raised male while Jacinta (and Thomasina) feel love for the daughter, Annabel. The infant, “Wayne”, receives surgery to make his body appear more fully male. He is also started on a regiment of hormones to keep his body more male than female. All of this is kept from Wayne while he is growing up but he is always aware of not feeling whole as he is. Thomasina, however, addresses the child as Annabel, when they are together privately.

In an interview for House of Anansi Press, Kathleen Winter was asked: “What do you hope readers will take away from their experience with Wayne and his shadow-self, Annabel?”

“I’d like readers to see Wayne/Annabel the way they see themselves, and look at the “other” gender within themselves. I feel point of view is everything, in life and in literature, and I hope the book treats the points of view held by its divergent characters with equal respect. In many ways, this book is, for me, about suspending judgment. When you understand why someone acts the way they do, even if the actions cause sadness or difficulty, then I think you can redirect your energy to something more fruitful than judgment. I also hope the reader will have the kind of reading experience I think books are really about: a connection with the characters and a suspension of the loneliness of being human. I hope this story, like all good stories, might give the reader a kind of relief and a joy.”

Winter set a large task for herself with Annabel. I feel she achieved perhaps more than she could have hoped for. Winter has created a wonderfully memorable story and Annabel (the character) is such a beautiful portrait of what it means to be human. Through Winter’s ability the reader feels the sadness, the loneliness but also the strength and the hope.

Other titles by Kathleen Winter

The Freedom in American Songs

Tracing Land and Dream in a New Northwest Passage

Books That Make Us Cry