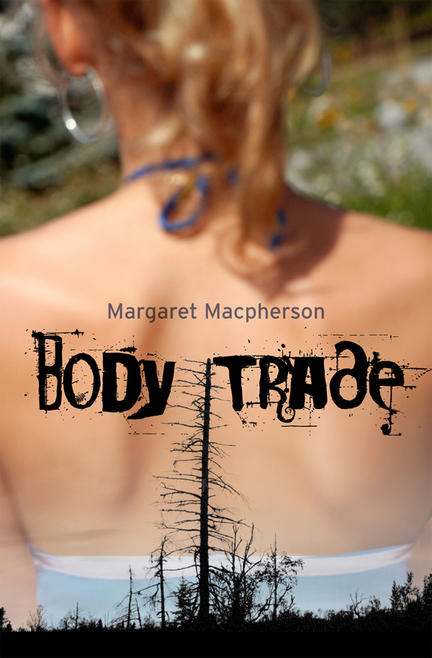 Body Trade weaves together two stories of survival. The main narrative follows Rosie and Tanya, two young Canadian women who decide to leave the Northwest Territories and head south on an ill-conceived road trip through California, Mexico and Central America. The story takes a life-defining twist when their search for freedom and adventure brings them into contact with predators of the Central American sex trafficking trade. The girls' journey into unknown and dangerous territory is punctuated with scenes from a plane crash in the far North, underlining the novel's themes of survival, betrayal, epiphany and hope. In a deeply personal narrative that explores power, sexual manipulation, cultural consumption and trust, Body Trade asks the ultimate question: To what terrifying places will we journey, and at what cost, in order to save our own lives?

Raised in Yellowknife, now Denendeh, NWT, Margaret Macpherson quickly got an education in the outside world travelling extensively in Europe, Australia, and Central America before settling into an English Lit undergraduate degree at the University of New Brunswick in Fredericton in the early ’80s. Macpherson wrote for periodicals and magazines (as well as being sole employee of a Halifax volunteer-run leftist bookstore) during her eight years in Atlantic Canada. In 1988 she and her husband moved to Bermuda where Macpherson worked as a full-time reporter.

Returning to Canada in 1992, Macpherson embarked on a Master of Fine Arts in Creative Writing from UBC and completed the program as a visiting grad student at Edmonton’s U of A. She published a few contract non-fiction books as well as a biography of firebrand Nellie McClung Voice for the Voiceless in the early 2000s, but it was the publication of her short story collection Perilous Departures that launched her literary career. A first novel, Released was nominated for a Manitoba best book award in 2009, followed by a second novel Body Trade which won the De beers NorthWords Prize for Outstanding book in 2012.

Meanwhile, Macpherson formed an extraordinary network of creatives in Edmonton where she acted as a fiction editor of the Other Voices literary journal, became a driving force in the Alberta Branch of the Canadian Authors Association, and later, was elected the AB/NWT Rep for The Writers’ Union of Canada.

While living with her partner and three (occasionally four) children during her middle years, Macpherson worked as a theatre arts editor for the alternative press, and was hired as Writer-in-Residence for the Edmonton Public Library system. She taught creative writing at King’s College University, the U of A Women and Word program, as well as through Edmonton’s Metro continuing education. She also supported her writing by teaching high school English Literature at Northern Institute of Technology (NAIT) while juggling a number of mentorships with younger (and older) writers though the Writers Guild of Alberta.

Macpherson paints, travels, laughs long and often, and continues to explore and record the mystical communion of living things. She has recently moved to Deep River, in Northern Ontario, to begin her third act with her life partner.

Tanya sees Amos first, standing on shore with his legs spread wide. He's waiting for them. She can see little puffs of dust coming off his dungarees as he taps his riding crop again and again.

"Oh boy," says Rosie, drawing back at the stern, trying to prevent the canoe from landing. "Tanya?"

With nowhere else to go, she digs in, countering her stroke and pulling them up to the beach. Amos's anger is a deep mahogany, his eyes the squished pulp of papaya.

Thwack. The riding crop comes down just above Tanya's hand as she steadies herself on the bow, preparing to leap to the sand. Thwack. He hits the boat again, enraged. "Who do you think you are?" he screams. Thwack.

She scrambles past, collapsing her belly and chest into her shoulders and back in case he decides to strike, but no, he's all drama. Rosie sits in the boat, now half in the water. She's afraid to come in, but at least she's out of reach of this lunatic.

"You think you can do that to me? To me? Do you know who they are? Do you know what they can do to us here?" Thwack. Thwack. Again and again his wrist brings down the whip on the boat.

Rosie scrambles to shore, but she's jumped out of the boat too soon and trips in the soft shore gunk. She scrambles to her feet, but finally lurches past his raised arm, trailing the stink of the soupy sea and her own fear. The girls stand close together, a human wall against his fury. For Tanya it is a definitive moment. Everything goes soft around the edges and there is only his voice, screaming and swearing. He holds the trembling crop close to her face, the whites of his eyes huge and bulging. "You. I know this is you, Tanya. I'll break you. You hear, puta de mierda? I'll break you." His spittle, like the foam of a rabid dog, lands on her cheeks and neck but she doesn't brush it away. Tanya stands up to him, staring, toe-to-toe, eyeball-to-eyeball. She will not back down.

Amos whips the crop again and she feels it whistle near her ear as her hair lifts and settles. He's close. If he touches either of them, she'll attack. Calm, girl, calm. Seconds pass. She opens her eyes, not realizing they were closed, yet still stands her ground.

"You'll pay for this, " he hisses. "No woman makes a fool of me. You hear? No woman." And with that he turns and marches towards the house. Tanya doesn't move. She watches water pool in the small heel indentations Amos has left in the black sand. He's gone.

"Yeah," she says flatly. "Mad, like a friggin' madman. We better avoid that mother for a while, eh? Best we steer clear of Mr. A-man. Amos-shame most."

She knows she sounds braver than she feels. No way that piece of shit is going to feed them to his black pig bosses. No matter what the deal, no matter what he's gone and promised, she and Rosie aren't anyone's snatch snack. They are not for sale.

That night at suppertime Amos executes his slow punishment. He butchers one of the turtles, a treat for all of them after a straight week of fish, but when he divides it and hands around the coconut husk bowls, Tanya see he has given her turtle spawn, a mess of newly fertilized eggs. A slimy membrane sticks yellowy gelatinous eyeball-sized eggs together. Inside each translucent sack is the black bloodspot of the yet-to-be-hatched turtle. The eggs jiggle and dance in front of her. Amos loves it. He's torturing her. He's pushing as hard as he can without touching.

Rosie gets the treatment, too, but not with such severity. Amos gives her the neck with the turtle's head still attached. It's gross, but at least there is meat on the neck. She breaks the head from the top vertebrae and starts to gnaw on the bony, boiled length of it. Tanya's so hungry she feels faint, but the eggs stop her cold. Tony and Max eat slowly, their enjoyment squelched by Amos's nastiness.

She hates him. She hates him so much she takes those eggs and eats them while he watches. She doesn't chew, she can't chew, she just lets them slide down her throat like slippery blobs of fat, quick and slimy, and she never once takes her eyes off his. Defiance is the only way they will survive. Tanya thinks of Rosie's kid David, how he ate those fuckin' lichen to survive. She will eat anything to prove that she can't be crushed. And it works. Amos, frowning, takes his own portion of turtle meat and leaves the fire to smoke or brood or plan his next move.

Tanya leaps up and crabs her way over to the latrine. The vomit she can't control means she has to taste the disgusting turtle eggs twice. She covers her puke quickly, so she doesn't have to see, and as she lurches upright, Rosie is there. She leads her back to the fire where Max has prepared hot coconut milk. He pretends not to notice the tears that salt Tanya's portion of rice.

The next morning there is more punishment. Tanya gets served the head of a catfish, while Rosie, Max and Tony share the rest. She senses there is little pleasure for them eating. Tony's eyes remain downcast. Maxi picks at his food, eats very little.

What's on her plate is a hideous thing. Amos has made a great show of serving it to her by lifting it by the snout whiskers and letting it hang, bloated, over-cooked and purplish grey, over her bowl.

Again Tanya steels herself. She finds small pockets of flesh in front of the fins, snatches of tenderness at the cheeks. She forces those morsels out with her fingers, trying to avoid the sucker mouth and dead eyes of the catfish.

"He's trying to break you," Rosie says later, smuggling a slice of breadfruit and a rice ball into her hand after the men have gone to check the traps. "He's trying to starve you out. Are you okay, Tanya?"

Tanya just nods, determined not to let him win, but at the same time wondering why it's her he has chosen to punish and not Rosie.

If contemporary fiction is fighting for its life, its followers ought to be on the lookout for writers who are brave enough to swim against the current tide. And if a writer has genuine star quality, a sharper, deeper radiance than most, then he or she ought to be identified and celebrated without delay. Time may be of the essence. Margaret Macpherson, a relatively unknown Maritime-born Albertan, is such a writer, and Body Trade, her seventh book and second novel, is the proof. She writes with the psychological insight of Carol Shields, the gravitas of Margaret Atwood, the poetic reflexes of Earl Birney and the earthy eroticism of Leonard Cohen, but her voice remains uniquely her own. Body Trade, released by the Winnipeg literary house Signature Editions, is a haunting road novel best described as a poetic thriller grounded in the real world. Macpherson also has one distinct advantage: her natural territory is comparatively untouched as literary landscape. She is a non-aboriginal native of the Northwest Territories, known vaguely to Canadians as "the North" and to readers around the world, if at all, as a new planet of undefined stretches of white space -- snow, ice, fog, the cold. There is powerful mystery here, and Macpherson knows it. That is where her story begins, when two young women come together in their desperation to escape what could only be their bleak northern futures.

Other titles by Margaret Macpherson

Memoir of a Settler Girlhood