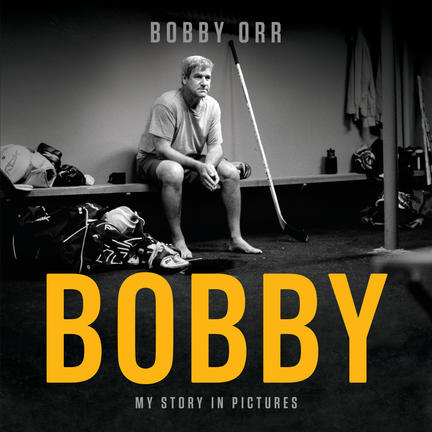 The incredible story of the life and phenomenal career of hockey's most legendary superstar, told through never-before-seen photographs.

Bobby Orr rarely speaks of his accomplishments as a hockey player. He doesn’t have to—his play did all his talking for him during his storied career. His was a style of seemingly effortless grace, a style that helped reinvent the sport of hockey.

Now, Bobby Orr shares his story through a personal collection of photos, inviting readers into different seasons of his life while introducing some of the people that filled these moments in time. We see him at home and in the dressing room. We are there the day the Boston Bruins first scouted him, at rinkside when he celebrated his first Stanley Cup with his father, and back in Boston the day his famous number four was retired.

Yet behind all the statistics, trophies, and public persona, is the man himself. There were losses to go along with the victories, disappointments alongside the accomplishments. Without the people around him, and without the many challenges he faced along the way, the triumphs would have meant much less.

Capturing not only a legendary career and incredible person, Bobby: My Story in Pictures also brings into focus a different era. These photos chronicle not only the changing of the game, but also mark many significant milestones of his life.

Personal, thoughtful, and full of never-before-seen images of Bobby Orr and those close to him, Bobby shows the varied sides of a player who rewrote the record book. It is a public journey into a world of a very private man.

BOBBY ORR, born in Parry Sound, Ontario, in 1948, played for the Boston Bruins from 1966 through 1976, and helped lead the Bruins to the Stanley Cup championship in 1970 and 1972, and to the finals in 1974. He also played two years for the Chicago Blackhawks. He is widely regarded as one of the greatest hockey players--maybe the greatest hockey player--of all time. His speed, scoring, and playmaking abilities revolutionized the position of defenseman. As of this date, he remains the only defenseman to have won the Art Ross Trophy league scoring title--twice--and still holds the record for most points and assists at that position. After his retirement in 1978, Orr was active with business and charitable works, and in 1996, Orr entered the player agent business, and today is president of the Orr Hockey Group agency. He has been invested with the Order of Canada and the Queen Elizabeth II Diamond Jubilee Medal, and in 2010 was one of eight athletes who bore the Olympic flag out during the opening ceremonies of the Vancouver Olympics. The Bobby Orr Hall of Fame is in Parry Sound, Ontario.

Excerpt: Bobby: My Story in Pictures (by (author) Bobby Orr)

INTRODUCTION
Unfortunately, I don’t have any photos from my childhood of me playing shinny with my buddies on the Georgian Bay or the Seguin River, which runs through my hometown of Parry Sound. Yet those memories remain quite vivid. The feeling of skate blades cutting through fresh ice was special. The fact that we rarely even noticed the cold shows how much we all loved to play. I can remember those games as if they happened only yesterday. I wish I had a few photos from those old days.

A photo is different from a memory in that it represents a single moment in time. It’s funny—when you look at a picture, you might think at first that you’re just looking at a person, or maybe a place, or some object. But really, you’re looking at a time. It would be great to see a photo of one of those outdoor games. Such a photo might reveal so many aspects of what was happening at that unique time in our lives. The problem with memories, of course, is that they can fade. But sometimes, memories simply must do.

And there are some wonderful memories. Many of us grew up playing on ponds and rivers and backyard rinks. There were borrowed skates, splintery old sticks, and anything we could find for goal posts—cold boots, pieces of split wood, anything would do. As long as there was daylight, we’d be playing somewhere.

Not just in Parry Sound, because Canadians from every part of the country have grown up that way for generations. If you’re reading this book, you probably know what I mean. You no doubt remember looking for lost pucks in snowbanks, and you can almost feel the way your toes ached when they finally thawed after being outdoors for so long. These are things that most of us share. Those days might be long gone, but you cannot escape the fact that they were moments that helped to mold our character.

No, I don’t have any photos of those endless games on the river. However, there are other photos that I do have from years gone by.

Some of them have ended up in boxes or cabinets, others in frames. Some of them have grown so familiar that I rarely even think of them anymore, while others still have been all but forgotten. What I have found, though, now that I am putting them all together and into some kind of order, is that once assembled, they start to tell a story.

Mine is a fairly typical story in a lot of ways. I grew up like many small-town Canadian kids in the 1950s. I was surrounded by a loving family and people willing to give me a hand. I was taught the basic ideas of working hard while trying to do your best. Eventually, part of that story has included being a husband and a father, and now a grandfather. I have been fortunate on many counts.

In the process I have had the privilege of playing in the NHL and raising the Stanley Cup. If you ever played the game as a youngster, you probably dreamed of something like that. You can imagine how good that felt when it actually did happen for me and my Bruins teammates. Yes, I worked hard to get there, but no one gets anywhere on their own. I was fortunate to have great people around me. And luck plays a part as well. That’s also a part of my story.

Like many kids, I grew up enjoying all kinds of sports and activities, but I fell in love with hockey very early. It was my passion, and I enjoyed every aspect of the game. That included just being in the dressing room and hanging out with the guys. Or feeling the puck on my stick blade during a rush. Or the anticipation as we waited on the bench for our turn to hop the boards and get on the ice to play. Hockey fans around the world seem to have that shared love of the game, wherever they might come from. And of course, the fans in Boston are no exception. I consider myself lucky that what made me love coming to the rink every day is what also brought those fans. That’s part of our collective story.

All to say that this book is much more than simply a bunch of photographs of me. What I hoped to do was bring together pictures that capture a time and to bring to life the game we all love.

We often treat photographs as though they’re precious objects. But the truth is, it’s what those photographs capture that’s truly precious. A lasting relationship, a wonderful victory, even a tough defeat. The reason our photos are worth cherishing is because what they capture is worth cherishing.

If that makes sense to you, then this book is for you. It’s about the big things in life, like family, as well as the little things, like a good day’s fishing. It’s about the things you control, like hard work and the company you keep, and it’s about the breaks we get along the way as well. Most certainly, this book is also about the great game we are so familiar with. But it’s personal, too. It’s about my parents and grandparents. It’s about my wife, Peggy, and my children and grandchildren. It’s about my closest friends. Sure, a lot of my story took place on the ice. But it also unfolded at home, or at the cottage, or in the dressing room. No one’s story takes place only at work, no matter how much they love their job. In that regard, my story is no different from yours.

Speaking of photographs, there is one of me that has become famous since it was taken back on May 10, 1970. It captures a single moment about as well as any photo possibly could. It gives us a hint of the kind of joy that playing sports can provide. In that one moment, everything came together perfectly, and the cameras happened to be clicking at just the right time. But it’s just one moment. All my teammates, coaches and trainers aren’t in that picture. My family is nowhere to be seen. The previous season’s disappointment had been forgotten by the time that moment arrived, and the next season’s uncertainty had yet to be felt. That photograph tells a story all right, but not the whole story.

Hopefully, these pages will help to tell that bigger story. At least, that is what I have attempted to put together.

I hope you enjoy it.

Other titles by Bobby Orr