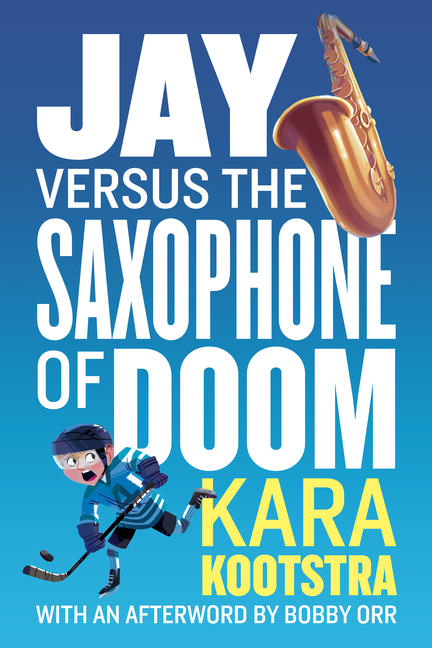 Who knew grade six music could be so scary? For kids who love The Diary of a Wimpy Kid and The Dork Diaries comes a hilarious new entry into funny middle-grade novels.

Jay Roberts loves hockey. He's good at it. He also loves his hockey hero, Bobby Orr, considered a legend by Jay's grandfather. In fact, even though they may bicker, when it comes to the Bruins, the whole family agrees that they are the team to root for.
When it comes to hockey, Jay's a team player, but there's one person who seems determined to make life hard for Jay: his classmate and fellow team member, Mick Bartlet. It's a good thing Jay can usually stickhandle his way out of his bullying. But something else is determined to make Jay's life difficult, something far harder for Jay to play: the saxophone.

PRAISE FOR Jay Versus the Saxaphone of Doom:

"[T]his story has the buoyancy of a life preserver, and humor’s sprinkled around like salt on an icy sidewalk." --Kirkus Reviews
"Fans of Diary of a Wimpy Kid and The Dork Diaries will enjoy this story of grade six gone awry as experienced by the funny and endearing Jay Roberts." --CM Magazine

PRAISE FOR The Boy in Number Four:

"This picture book will inspire children in grades K - 3 about the strength, the determination and commitment it takes to make a dream come true. Highly recommended for classrooms, biography discussions, beginning research on a famous person, discussions of character and goal setting." --Resource Links

Other titles by Kara Kootstra

Other titles by Bobby Orr

My Story in Pictures