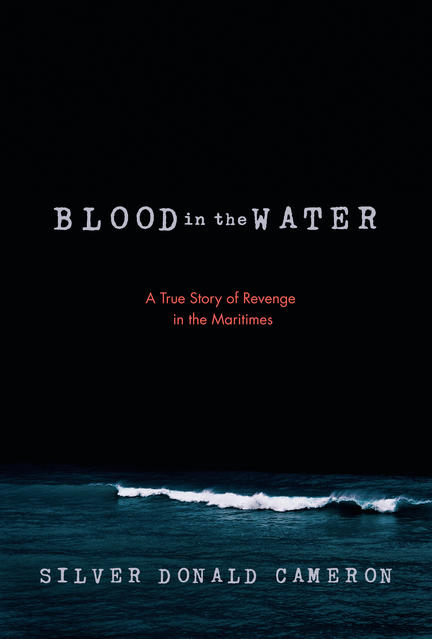 A brutal murder in a small Maritime fishing community raises urgent questions of right and wrong, and even the nature of good and evil, in this masterfully told true story.

In June 2013, three upstanding citizens of a small Cape Breton town cold-bloodedly murdered their neighbour, Phillip Boudreau, at sea. While out checking their lobster traps, two Landry cousins and skipper Dwayne Samson saw Boudreau in his boat, the Midnight Slider, about to vandalize their lobster traps. Like so many times before, Boudreau was about to cost them thousands of dollars out of their seasonal livelihood. One man took out a rifle and fired four shots at Boudreau and his boat. To finish the job, they rammed their own larger boat over the top of his speedboat. Boudreau's body was never found. Then they completed the day's fishing and went home to Petit de Grat on Isle Madame.

Boudreau was a Cape Breton original--an inventive small-time criminal who had terrorized and entertained Petit de Grat for two decades. He had been in prison for nearly half his adult life. He was funny and frightening, loathed, loved, and feared. One neighbour says he would "steal the beads off Christ's moccasins"--then give the booty away to someone in need. He would taunt his victims, and threaten them with arson if they reported him. He was accused of one attempted rape. Meanwhile the police and the Fisheries officers were frustrated, cowed, and hobbled by shrinking budgets. Boudreau seemed invincible, a miscreant who would plague the village forever.

Cameron, a resident of the area since 1971, argues that the Boudreau killing was a direct reaction to credible and dire threats that the authorities were powerless to neutralize. As many local people have said, if those fellows hadn't killed him, someone else would have. Like Say Nothing, The Perfect Storm, The Golden Spruce, and Into Thin Air, this book offers a dramatic narrative set in a unique, lovingly drawn setting, where a story about one small community has universal resonance. This is a story not about lobster, but about the grand themes of power and law, security and self-respect. It raises a disturbing question: Are there times when taking the law into your own hands is not only understandable but the responsible thing to do?

An award-winning writer of novels, short stories, drama, radio documentaries and more than 500 articles, including such essential books as The Education of Everett Richardson in 1977, Wind, Whales and Whisky: A Cape Breton Voyage in 1991, The Living Beach in 1998, and Warrior Lawyers: From Manila to Manhattan, Attorneys for the Earth in 2016, Silver Donald Cameron is the participating host of thegreeninterview.com —over one hundred educational podcasts of extended video, audio and text interviews with environmental leaders from around the world.

A NATIONAL BESTSELLER
WINNER of the 2021 Atlantic Book Awards' Robbie Robertson Dartmouth Book Award for Non-Fiction
SHORTLISTED for the 2021 Crime Writers of Canada Brass Knuckles Award for Best Nonfiction Crime Book
HONOURABLE MENTION for the John Lyman Book Award in Canadian Naval and Maritime History
One of The Globe’s “100 favourite books of 2020”
Praise for Blood in the Water:

“Fascinating! Blood in the Water . . . provides deep insights into how communities work: how they succeed, [and] how they can fail. Must-read for all concerned about how humans manage to live together. Or not.”
—Margaret Atwood, via Twitter

“It was easily dismissed as the 'murder for lobster'—a senseless, brutal act. But to the master storyteller Silver Donald Cameron, who has a deep knowledge of the people and the history of where it happened, it was anything but senseless. It was a crime that over time became, in many minds, inevitable.”
—Linden MacIntyre, author of The Wake

“With its elegant prose and a cast of characters fit for any work of fiction, Blood in the Water takes us through one of the most remarkable criminal trials in the history of Nova Scotia. Silver Donald Cameron grapples with the complexities of small-town culture where history, blood, and tradition can override everything, even murder.”
—Donna Morrissey, author of The Fortunate Son
“A helluva tale, full of quirky twists and enchanting details, and told in vintage Silver Donald Cameron style. He piques your curiosity in the first paragraph and delivers a master class in storytelling. Blood in the Water is about a moral dilemma that will linger long after you turn the final page.”
—Sally Armstrong, author of Ascent of Women

“Silver Donald Cameron tells a story of community bonds under strain, and tells it with compassion and nuance. Thanks to his own ties to Cape Breton, Cameron transcends the easy 'Murder for Lobster' headlines to reveal the grey areas of the case and the humanity of a tragic villain. His compelling account of the desperate response to that villainy, and of an imperfect legal system, deserves a place in criminal law classes, yet feels like a small-town yarn spun by the gifted raconteur next door.”
—Jacques Poitras, author of Irving vs Irving
“Silver Donald Cameron has produced a riveting account of transgression and murder in rural Nova Scotia. Shakespearean in scope, Blood in the Water rises above the true crime genre to offer powerful insights into the complexities, and the dark side, of Maritime society.  It should be on the bookshelf of every Canadian who enjoys a cracking good read, and wants to better understand this country.”
—Michael Harris, author of Party Of One
“This is a truly Canadian tale told in truly Canadian voices. Read it!”
—Gail Bowen, author if the Joanne Kilbourn Shreve mystery series
“Blood in the Water is a meticulous and engrossing telling of the behind-the-scenes story of the so-called 'Murder for Lobster' case that stunned the tiny Acadian community of Isle Madame, Cape Breton, and generated headlines far beyond. But it is also a revealing contemplation of the close ties that can both bind or fetter small rural communities, told by a master storyteller with a deep connection to that unique place.”
—Pauline Dakin, author of the bestseller Run, Hide, Repeat

“What doesn't this book have? It’s a small-town murder, courtroom drama, morality play, memoir and popular history all rolled into one compelling and entertaining read.”
—Ann Brocklehurst, author of Dark Ambition
“Silver David Cameron knew intimately the Cape Breton community where the brutal murder of a local who was vandalizing lobster traps took place. But instead of that insider knowledge giving him too narrow a focus, it enables him to see beyond the broad strokes of the story—and so bring to life ideas about power, law, vigilantism and community.”
—Toronto Star

“[A] brilliant finale to an illustrious career. . . . [A] masterful true account of a celebrated small-town murder.”
—The Globe and Mail

“Cameron, who lived on Isle Madame for nearly 50 years . . . successfully weaves together courtroom drama, memoir, and an insightful exploration of people and place, capturing the complexities of Boudreau’s life and the circumstances of his death. . . . Cameron deftly moves from James Landry’s second-degree murder trial to Acadian language and culture, local Indigenous concepts of law, his own relationships with his neighbours, and the shortcomings of policing in rural areas.”
—Quill & Quire

Other titles by Silver Donald Cameron

The Bluenose and the International Fishermen's Cup, 1920–1938

Life, Death and Politics where the Land Meets the Sea

Once Upon a Schooner

A Foreign Voyage In Bluenose II