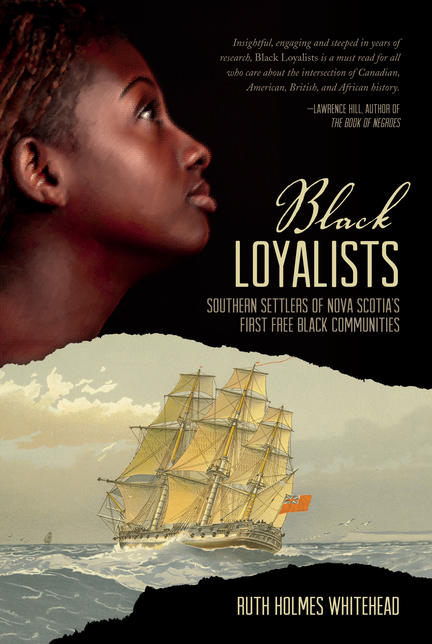 After the final surrender of the British to the Americans, New York City was evacuated by the British Army throughout the summer and fall of 1783. Carried away with them were a vast number of White Loyalists and their families, and over 3,000 Black Loyalists: free, indentured, apprenticed, or still enslaved. More than 2,700 Blacks came to Nova Scotia with the fleet from New York City.

Black Loyalists is an attempt to present hard data about the lives of Nova Scotia Black Loyalists before they escaped slavery in early South Carolina, Georgia, and Florida, and after they settled in Nova Scotia to bring back into our awareness the context for some very brave and enterprising men and women who survived the chaos of the American Revolution, people who found a way to pass through the heart, ironically, of a War for Liberty, to liberty and human dignity.

Includes an insert of 20 historical images and documents.

Ruth Holmes Whitehead has worked since 1972 for the Nova Scotia Museum, since 2003 as a Curator Emerita and Research Associate. She has authored or co-authored twenty books, including Stories from the Six Worlds, The Old Man Told Us, Black Loyalists, and Ancestral Images. In 1995, she was awarded a Doctorate of Laws, honoris causa, by St. Francis Xavier University. In 2014, Dr. Whitehead was inducted into the Order of Nova Scotia. She lives in Halifax.

p>The Black Loyalists illuminates a fascinating and moving episode of history I'd known nothing about. There are so many paradoxes, not least that black people should fight on the side of the King - for the promise of freedom - in the very war which Americans fought for independence. It was not an easy transition. Many of the men joined the Loyalist armies as soldiers. But what about families what about the women? The children? And what happened when the British surrendered? The American forces under George Washington demanded the restoration of property, including slaves, and it fell to individual British commanders to interpret orders and make decisions on whether to honour early promises. Some Black Loyalists were abandoned, but for those who made it Nova Scotia, there were still many challenges to face: home-building, earning a living, and coping with often hostile attitudes from local communities.

Ruth Holmes Whitehead took eighteen years to write and research this book which is both a work of scholarship and a labour of love, gracefully and clearly written with some poignant personal touches.

"In her new book, Whitehead succeeds in providing readers with sound analysis of primary source evidence that reveals the inhumane treatment of Black Loyalists living in South Carolina, Georgia and Florida who were bought and sold like commodities prior to escaping to Nova Scotia." —Boxscore.com (US)

Other titles by Ruth Holmes Whitehead

A Remembrance of the Dead and an Archive for the Living

The Mi'kmaq in Art and Photography

Stories From the Six Worlds

The Life of Boston King

How Their Ancestors Lived 500 Years Ago