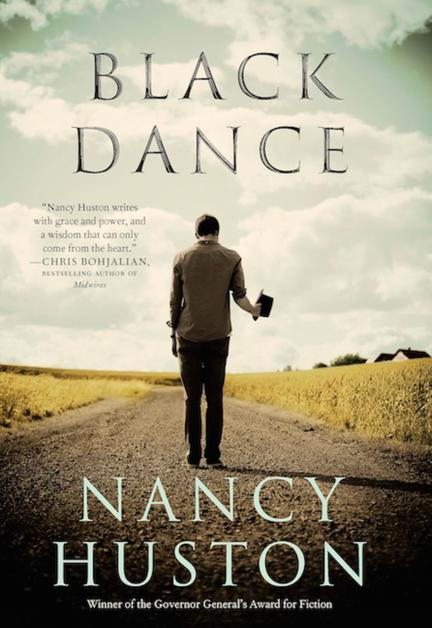 Screenwriter Milo Noirlac is dying. He lies in the dark of his hospital room, voices from Milo’s past and present—real and imagined—swirl about his head, each taking on the rhythm of his favourite Brazilian fight-dance, the capoiera. Seated next to him, Milo’s partner, bumptious director Paul Schwartz, coaxes Milo through his life story, from the abuse he suffered as a foster child to his lost heritage—his great-grandfather’s ostentatious wealth. As Milo narrates, his story becomes the couple’s final screenplay, the movie that will be their masterpiece.

Packed with humour and pathos, and written with Huston’s signature vivacity, Black Dance is a rich portrait of one man’s life and death—a swirling, sensual dance of a novel from an exceptional and rare literary voice.

Nancy Huston’s books have won the Prix Goncourt des Lyceéns, the Prix Elle (Quebec) and the Governor General’s Award. Her novel, The Mark of the Angel, was an international bestseller, which won the Grand Prix des Lectrices de Elle, the Canadian Jewish Fiction Book Award, the Torgi Award and was shortlisted for the Giller Prize. Fault Lines won the Prix Femina in 2006. Nancy Huston lives in Paris with her husband, the writer Tzvetan Todorov, and their two children.

"Canadian author Nancy Huston is one of my favorite working writers, and her latest novel, Black Dance, captures what’s so great about her writing. This multigenerational tale—think Zadie Smith or Michael Ondaatje—spans Dublin’s 1916 Easter Rising, rural Quebec, and Montreal’s midcentury underclass to tap into questions of (multi)cultural identity, creativity, and childhood awakenings. It quite literally braids together the lives of its characters in a fluid, sensory way. And with the help of the book’s screenplay framing, Huston, who self-translates her own work from French to English, packs all of this into a tight, fast read." - Slate Magazine

"Nancy Huston writes with grace and power, and a wisdom that can only come from the heart." - Chris Bohjalian, bestselling author of Midwives
"A blazing ode to freedom." - Paris Match
"A magnificently structured novel, one that captivates with its grace and power." - Madame Figaro
"As musical as a Bach prelude." - Elle (France)

Other titles by Nancy Huston

A Short Study of Humankind

Musings on Land, Tongue and Self