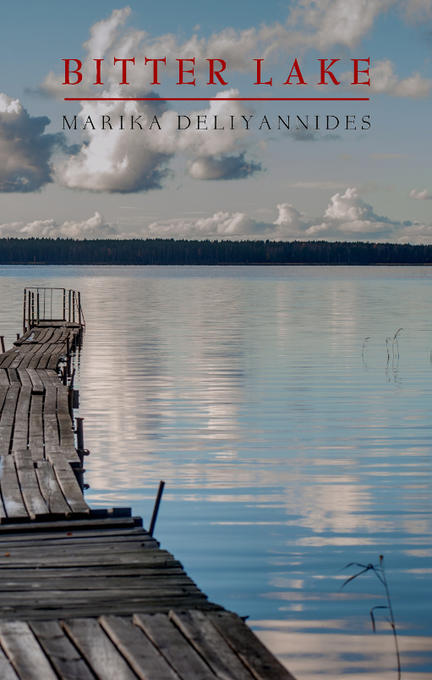 Past, present, and future collide when an unhappily pregnant, mid-thirties woman visits her childhood home near the shores of Bitter Lake.

Born in Edmonton to immigrant parents, Marika Deliyannides lived in Greece for a short time before moving back to Alberta at the age of six. Her family lived in a rural town that shares many similarities with the fictional town of Concord?including the nearby lake where teenagers cruised on summer nights. Bitter Lake is her literary debut. An excerpt of the book was awarded the Brenda Strathern Prize for most promising first fiction and was also published in Alberta Views Magazine as winner of its annual fiction contest.

Deliyannides is a graduate of the University of Alberta's English program, has published several short stories in literary magazines, and has been a business writer in Edmonton and Calgary, producing magazine articles, business copy and speeches.

She lives with her husband and two children, working from her home office overlooking the oil and gas towers of downtown Calgary.

I am trapped in my car.

A day so muddled by the grey sky that it appears winter is coming, not going.

A day at odds with itself.

I?ve been this way for over an hour, an uneasy hostage fettered by the steering wheel as my car moves me closer to my destination. A glaze of sweat dampens my upper lip; my stomach tightens in a queasy knot. I take a deep breath and hold it in my lungs. Is there any journey so filled with apprehension as the one that leads you home”

It's as though a greater force, something manipulating me beyond my better judgment, has reached out its meddling hand to pluck my black Honda Civic from its regular city life and deposit it on this rural highway, where cars move forward cautiously through the sleet of the early Alberta spring. The highway is an assembly line, and I?m just one piece of the moving creation, to be spit out only when my final shape has been realized.

The reason for my reluctance is no mystery?

Seven days ago, my sister, Dorothea, phoned from Concord, where she lives with my parents and her eight-year-old son, Ryan. She was calling about my parents” move to the Vista Grande Retirement Villa. "So are you coming to help?" she asked, speaking too loudly as usual.

I pictured her at the beige wall phone in the kitchen of our old home with its worn checkerboard floor and avocado-green fridge, frowning as she looked out the large picture window bordered by ruffled curtains. Or perhaps she was in the downstairs rumpus room on the rust-brown velour sectional sofa, chosen by our mother years ago to match the knotty brown macramé plant hangers that had long been purged of their dried-up ferns.

She saw through it, of course. "So that means no?" She snorted. "It figures!"

"For Christ's sake, don?t act as though you?re the only one who ever shows up." Her voice rattled me, as it always did. Because her left ear is deaf from a deformity known as cauliflower ear (a condition usually reserved for professional boxers), she's prone to talking in a near yell.

"Well show up then, and give me a hand. These boxes aren?t going to pack themselves."

"Our bathroom's in the middle of being retiled," I objected, cutting into a bag of plaster with a utility knife.

"I?ve got Ryan to look after and my midterms are coming up. Anyway, I do enough around here."

I clutched the knife in my hand. I?d taken on another home-renovation project, keen to replace the old black ceramic tiles, which constantly needed to be wiped dry of water spots. "Are you kidding me?" Calvin had said when he came home to find boxes of limestone tiles stacked like a dam in the front hall. "Should you even be lifting those boxes?"

Dorothea's shrill voice twisted my insides out. I owed my sister?and not just for the crumpled, useless ear. The childhood accident that caused the disfigurement was only a precursor. I could hardly refuse her request to come home. "Okay," I acquiesced, sliding the blade back into its sheath. "I?ll be there."

Bitter Lake is an accomplished work on silence: what happens when families ignore a tragic moment.

A melancholic debut by Marika Deliyannides, Bitter Lake explores one woman's "aching disquietude" and the latent complications of homecoming.

As Zoe Lemonopolous returns to her childhood home to help her parents move to a retirement villa, she confronts the fallout of a teenage incident that led to estrangement from her younger sister, Dorothea, and to her own ambivalence toward impending motherhood. Subtle in its gradual revelations and unapologetic in its characters' avoidance of pain, this intelligent novel portrays the arrival of emotional maturity in Zoe's thirties.

Domestic scenes of Zoe's married life in Calgary and of her family's home in rural Concord alternate with flashbacks to the 1980s in a contemplative plot that depicts the humiliations of youth, widening rifts between lovers, and Zoe's abandonment of Dorothea, who comes to harm in her absence. Deliyannides, whose novel excerpt from Bitter Lake received The Calgary Foundation's Brenda Strathern Prize, offers a nuanced perspective on regret. Guilt and desire mix with fear and complacency. Zoe's tendency to "reframe" memories in ways that deflect blame?a frustrating habit?and to walk away from hard conversations quickly become an unbearable way to live. Careful scenes build toward a watershed that results in a fragile, tacit truce.

Scenes of Zoe packing her parents' belongings temper darker topics, such as rape and infidelity. They also serve as effortless transitions between memories. The objects themselves, from eye-shaped charms to a lava lamp, reveal Zoe's life as the daughter of a Greek father and Canadian mother. Zoe's work as a professional organizer also allows her to make astute observations, including "It seemed my entire adult life had been about keeping things tidy instead of resolved." The recurring theme of imposing order on the external world while experiencing inner discord serves as a particularly thoughtful backdrop as Zoe attempts to push away her own increasing self-doubt.

While much of the focus remains on Zoe's memories of being bullied, her tense relationship with her husband, and her failed attempt at reconnecting with a classmate from her past, it is her parents who emerge as imperfect, memorable forces. Their appearances, both in the present and past, and the physical reminders of their decades together create a colorful portrait of lives shaped by struggle. The book is less rewarding when focusing on detailing moments of pettiness between Zoe and Dorothea; while this captures the strains in their relationship, Dorothea is left seeming merely distanced.

Bitter Lake is an accomplished work on silence: what happens when families ignore a tragic moment, and what happens when individuals refuse to accept their own fortunate circumstances. It is an unsettling, worthy read.

'Bitter Lake is a satisfying novel at every level, its complexity handled with skill. For me, it represents the kind of story I like best?a fast and thought-provoking read.'

'The debut novel from Marika Deliyannides (short story writer and 2010 winner of the Brenda Strathern Prize) is a compelling account of one woman's journey into the past and into the self. The faultlessly structured narrative pulls one through, easily, by both suspense and insight?we want to know what happens next, want to find out the tragedy hinted at from the start, want to know everything about our narrator. This is a novel with a serious drive to understand why people are the way they are.'