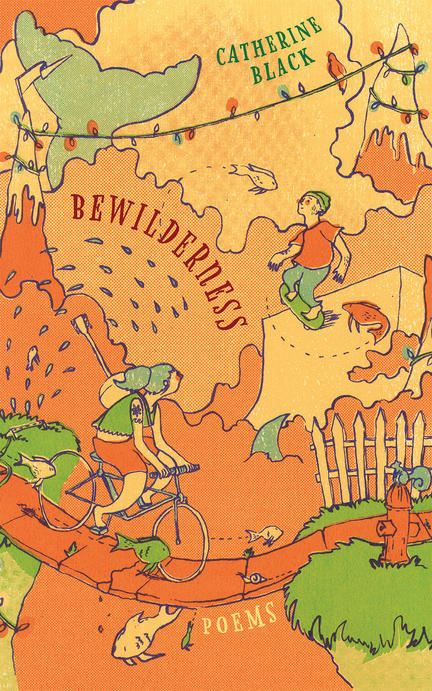 Bewilderness explores urban and suburban wildernesses--threshold places--in a darkly comedic, surreal set of prose poems. In Bewilderness, urban and suburban landscapes come to life as shape-shifting places, enchanted places, mundane places of magical thinking, as the reader explores the heterotopias of playgrounds and backyards, lakefront parks, splintery subdivisions, and semi-industrial wastelands. Creatures that inhabit these edged-out corners of land take on the features and neuroses of their human co-habitants in poems that are direct, declarative missives with offbeat instructions for navigating and inhabiting these liminal worlds.

Catherine Black is Associate Professor and Chair of the Creative Writing BFA program at OCAD University. Catherine’s first collection of prose poetry Lessons of Chaos and Disaster was the second book in Guernica Edition’s “First Poets Series,” and her lyric nonfiction novella A Hard Gold Thread (Guernica, 2011) was nominated for the ReLit award. Her third book, Bewilderness, was nominated for the Pat Lowther Memorial Award. Broadly speaking, Catherine’s areas of interest and expertise in creative writing include experimentations in prose poetry and other hybrid forms such as the lyric essay and longer experimental fiction. Thematically, her work interrogates the reliability of memory, the intersections of imagination and reality, as well as issues of motherhood, ‘madness,’ and the dissociative aspects of grief and trauma. Catherine has recently begun to explore ways in which her writing might span media, through guerrilla poetry projects and the creation of literary objects.

Black’s poems read like an I spy: a crush of beloved items, textures, ideas. People are described by the objects in their houses, by the things they gather and guard. It feels like pastiche, like a dream, like watching an enterprising songbird build a nest out of foraged scraps and garbage, out of “glass and ash, nests of cigarette butts and pigeon down” (“A Home from Nothing”). Black writes: “I know the panic of assembling a home from nothing.” These poems seem to whisper: even nothing can be made into everything you need.

From the natural world to the liminal space between dream and hard reality, Catherine Black reveals the strange and beautiful in these leaping image prose poems. I was uplifted by this collection: it is both shelter and nourishment. —Carolyn Smart, author of Careen. In Bewilderness, each item in the notebook of everything is connected by an invisible thread to each other thing. Catherine Black weaves her poems with these threads, connecting the luminosity, resonance and being of the everyday, its complex web of perceptions and emotions with evocative sensory and conceptual allure. We are ''bewildered'' in that everything, even the familiar, is newly discovered, wild to possibility, observation and poetry. As this book reads our world, we read this book: with eyes wild open.

author of Yiddish for Pirates

From the natural world to the liminal space between dream and hard reality, Catherine Black reveals the strange and beautiful in these leaping image prose poems. I was uplifted by this collection: it is both shelter and nourishment.

Black encourages readers to open their eyes wider and have another look at the world around them the way nineteenth-century pastoral poetry sought to slow down time and emphasize the details that might get overlooked in the fast pace of modern life. Bewilderness updates this mandate for the twenty-first century as Black turns her gaze to the city, which has become a landscape in a category all its own.

Black tends to write in direct, declarative sentences, but she achieves an incantatory urgency through repetition and a build-up of expressive images.

Other titles by Catherine Black