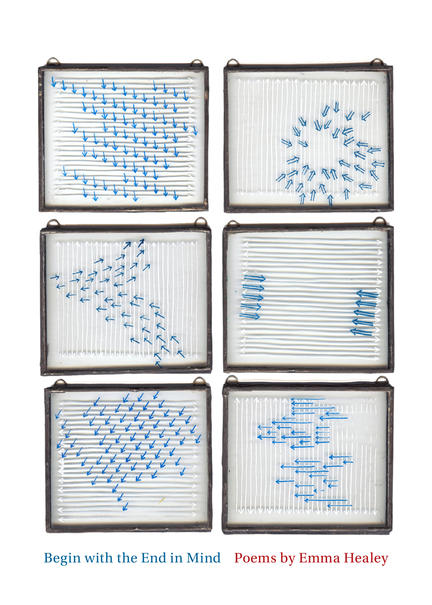 Residing on the border between poetry and prose, Emma Healey masterfully navigates the tension and balance between the two forms. Her writing examines the animate qualities of seemingly inanimate things and explores personal relationships, collective and individual human experiences, as they are distilled through our encounters with such things as the CBC, chain bookstores, the contents of a kitchen, or the expanse of a whole city. Begin With the End in Mind tests the capabilities of the prose poem--the specific rhythmic, lyrical, and syntactic possibilities of the form, and the opportunities for play, renegotiating the more traditional/technical elements of lyric and line that are afforded the prose poet.

Emma Healey is a Montreal-based writer and the founder and editor-in-chief of the Incongruous Quarterly, an online literary magazine devoted to the publication of unpublishable literature. Her fiction and poetry have appeared in magazines such as Matrix, Broken Pencil and the Void, and in various online publications including Joyland, Said the Gramophone, Cellstories, and Lemon Hound. Her work has been featured in the anthologies Can'tLit: Fearless Fiction from Broken Pencil Magazine and Gulch: An Anthology of Poetry and Prose. Her poem "The National Research Council Official Time Signal" was published as a limited edition monograph by No Press in 2011. She was the 2010 recipient of the Irving Layton award for poetry, and was shortlisted for the same award in 2011 and 2012.

These are poems that demand you pay attention. Pithy and persuasive, Healey's "Heritage Moments"; series in particular knocks out an offbeat version of the Canadian National Anthem that makes me want to rise and place hand over heart. Begin with the End in Mind is strange, seductive, and brainy.--Emily Schultz

Who needs a tightrope to stroll across Niagara Falls when you have the prose poem--pliable, surreal, infinitely hackable. These poems from Emma Healey signal the arrival of an exciting, nimble, new voice --Sina Queyras

Through the lens of Emma Healey's poetry the narratives by which Canadian identity has been (and continues to be) formed are re-envisioned in powerful and at times poignant poems of profound personal and political import.--Phillip Coleman, The Penny Dreadful

Other titles by Emma Healey