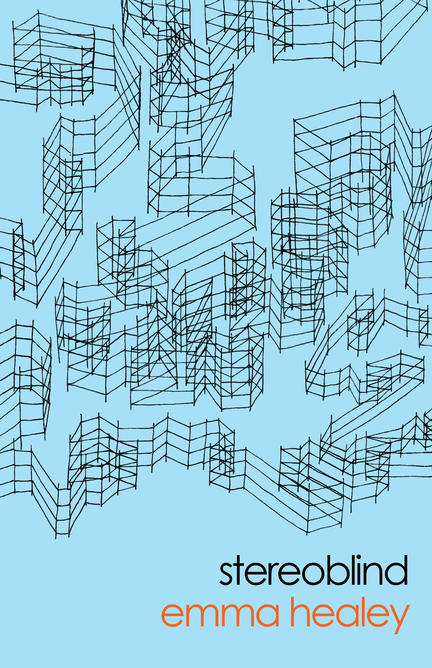 In Stereoblind, no single thing is ever perceived in just one way. Shot through with asymmetry and misconception, the prose poems in Emma Healey’s second collection describe a world that’s anxious and skewed, but still somehow familiar — where the past, present, and future overlap, facts are not always true, borders are not always solid, and events seem to write themselves into being. An on-again, off-again real estate sale nudges a quartet of millennial renters into an alternate universe of multiplying signs and wonders; an art show at Ontario Place may or may not be as strange and complex (or even as “real”) as described; the collusion of a hangover and a blizzard carry our narrator on a trancelike odyssey through Bed Bath &Beyond. Using a diverse range of subjects — from pharmaceutical research testing to Tinder — to form an inventory of ontological disturbance, Healey delves into moments when the differences between things disappear, and life exceeds its limits.

Emma Healey is a Montreal-based writer and the founder and editor-in-chief of the Incongruous Quarterly, an online literary magazine devoted to the publication of unpublishable literature. Her fiction and poetry have appeared in magazines such as Matrix, Broken Pencil and the Void, and in various online publications including Joyland, Said the Gramophone, Cellstories, and Lemon Hound. Her work has been featured in the anthologies Can'tLit: Fearless Fiction from Broken Pencil Magazine and Gulch: An Anthology of Poetry and Prose. Her poem "The National Research Council Official Time Signal" was published as a limited edition monograph by No Press in 2011. She was the 2010 recipient of the Irving Layton award for poetry, and was shortlisted for the same award in 2011 and 2012.

Other titles by Emma Healey

Begin With the End in Mind