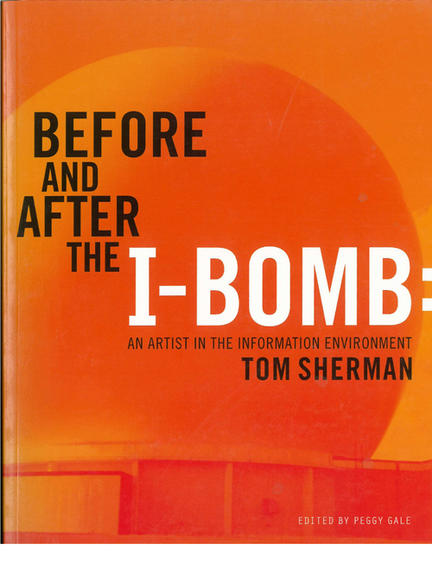 There was a time, not too long ago, when people wrote letters (and mailed them), picked up the phone and spoke to people (not voice mail systems) and considered whether to invest in expensive new "fax" technology as a means of speeding up communication. Children went outside to play games that didn't require a console and screen, schools bought books, and computers filled entire floors of some offices. In less than twenty years, our homes, schools, cars, workplaces and leisure activities have been revolutionized by the onslaught of technology.Tom Sherman, part artist, part writer and part visionary, got wired early and has spent much of his career leading the way through the aftershocks of the "I-Bomb" and its information revolution.

Tom Sherman is an artist and writer, who works across media (print, video, radio, performance, the web). Sherman represented Canada at the Venice Biennale in 1980, and has been featured in hundreds of international exhibitions and festivals, including the Vancouver Art Gallery, National Gallery of Canada, Museum of Modern Art (New York), Whitney Museum of American Art, and Documenta X. He has published extensively, including Cultural Engineering and Before and After the I-Bomb: An Artist in the Information Environment and was the founding Head of the Media Arts Section of the Canada Council in 1983. In 1997 Sherman founded Nerve Theory, a recording and performance duo with Viennese musician and composer Bernhard Loibner, and the duo has contributed to many radio venues internationally. Sherman has received the Bell Canada Award for excellence in video art, the Governor General’s Award in Visual and Media Art, and is Professor Emeritus in the Department of Film and Media Arts at Syracuse University.

"Sherman integrates a deeply critical perspective on modern life with an understanding and sense of hopefulness that denies cynicism [and] defies ideological categorization. Read Sherman slowly and then re-read. You will find his to be one of the most original and powerful voices of a generation."--David A. Ross"Tom Sherman is an artist who has drawn deeply on his study of communications, the information economy, and natural science. His writing works with and between these disciplines, postulating new ideas and congruencies, revealing possible truths for our future. In some cases, speculation has become prophetic fact."--Peggy Gale, Preface"I'm 'blanking' on the 'i-bomb.' I'm 'buffeted by the message storm' in Tom Sherman's poetic semi-fictional polemic on 'the slow burn of telecommunications through the late 20th century.' So, 'don't check for my pulse. I just want to be a dial tone.'"--John Oswald, Perpetrator of Plunderphonics

Other titles by Tom Sherman

A Perceptual History of the Future

Other titles by Peggy Gale

Where were the Mothers?