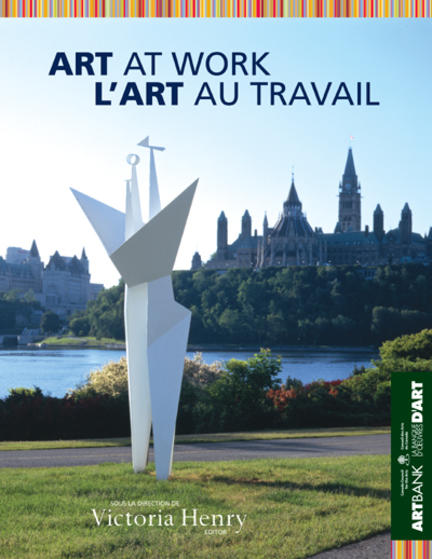 The Art Bank of the Canada Council for the Arts is one of Canada's greatest treasures, holding more than 18,000 paintings, prints, photographs, and sculptures by over 2,500 contemporary artists. Because the Art Bank rents its works to government and corporate offices, pieces are enjoyed every day in public spaces, but the collection itself is never seen. Now, to mark its 35th anniversary, the Art Bank "exhibits" its collection in Art at Work. In English and French, Art at Work/L'art au Travail celebrates the Art Bank as a uniquely Canadian vision, a major collection, a financial success story, and an inspiration to governments across Canada and abroad. Introduced by Adrienne Clarkson, the essays by Victoria Henry, David Silcox, Peggy Gale, Pierre Landry, and Jeff Thomas tell about the Art Bank's scope, range, and purpose. Sumptuous photographs make Art at Work a work of art in its own right.

Pierre Landry, an art historian, consultant, and freelance researcher and writer, teaches art history and museology in the department of Visual Arts, University of Ottawa. His electronic works include “Canada in WWII,” created for the Web site of the Juno Beach Centre.

David P. Silcox is the bestselling author of The Group of Seven and Tom Thomson, as well as an art historian and a cultural administrator. Former President of Sotheby’s Canada, he is a Senior Fellow at Massey College, University of Toronto. He served as Associate Dean and Professor, Faculty of Fine Arts, York University, and has served on the boards of over thirty cultural and educational organizations across Canada and abroad. Silcox is known for his extensive writings on Canadian artists, including David Milne, Emily Carr, Christopher Pratt, Jack Bush, the Group of Seven and Iain Baxter.

Harold Town (1924–1990) was the pre-eminent artist of his generation in Toronto. With Oscar Cahén and Walter Yarwood, he was a founding member of Painters Eleven. His work is in the collections of major museums across Canada and in the Tate Gallery, Museum of Modern Art, Guggenheim Museum, Metropolitan Museum in New York and Hirschhorn Museum in Washington, DC. He represented Canada often in world art fairs, including Documenta, Brussells World Fair, Venice Biennale (three times) and other prestigious international venues. Town also wrote several books, reviewed many art books, wrote many provocative magazine articles and had a regular column in Toronto Life.

Jeffrey M. Thomas, RCA is a noted photographic artist and curator and a member of the Onondaga tribe of Six Nations, Ontario. Among his curatorial works is Where are the Children? Healing the Legacy of Residential Schools, National Archives of Canada, 2003.

Adrienne Clarkson became Canada’s twenty-sixth Governor General in 1999 and served until September 2005. She is the bestselling author of Heart Matters: A Memoir, Room For All Of Us: Surprising Stories of Loss and Transformation, and Great Canadian Lives: Norman Bethune. In her multi-faceted career as an accomplished broadcaster and distinguished public servant, she has received numerous prestigious awards and honorary degrees in Canada and abroad. In 2005, she co-founded the Institute for Canadian Citizenship. In 2006, she established the Clarkson Cup, which is now the championship trophy for the Canadian Women’s Hockey League. In 2007, she was appointed Colonel-in-Chief for Princess Patricia’s Canadian Light Infantry. A Privy Councillor and Companion of the Order of Canada, she lives in Toronto.

"Art at Work is a seminal work of impressive dimensions and a welcome addition to Canadian Art History reference collections and supplemental reading lists." — Bookwatch

"The sumptuous photographs make this a work of art in its own right." — Antiques &; Collectibles Showcase

"The sumptuous photographs make this a work of art in its own right." — Antiques &; Collectibles Showcase

"Art at Work is a seminal work of impressive dimensions and a welcome addition to Canadian Art History reference collections and supplemental reading lists." — Bookwatch

Other titles by Peggy Gale

Where were the Mothers?

Before and After the I-Bomb

An Artist in the Information Environment

Other titles by Pierre Landry

Juno Beach a Window On Canada in World War II

A Window on Canada in World War II

Other titles by David Silcox

The Silence and the Storm

The Group of Seven and Tom Thomson

Other titles by Adrienne Clarkson

A Portrait of Canada’s Parliament

Adventures in Canadian Film and Television

The Paradox of Citizenship

Room for All of Us

Surprising Stories Of Loss And Transformation