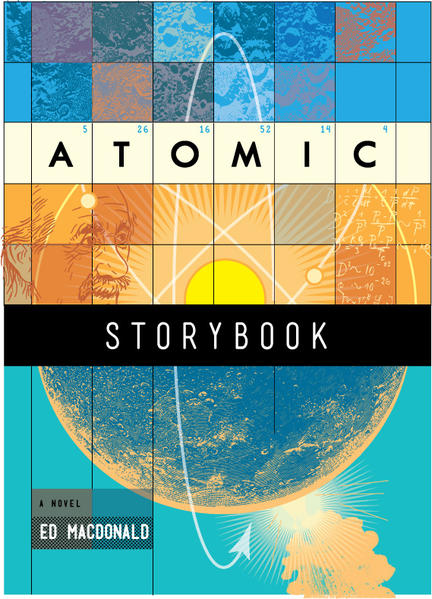 Atomic Storybook is a novel about a young painter named Owen who is regularly abducted by beings he calls “the space pricks.” These otherworldly visitors perform experiments on him, befuddle him with an absurd riddle about the moon, and show him scenes from his previous lives — one as a 12th century English monk; in another he shares the ward with Albert Einstein’s son, Eduard, in the Burghölzli mental hospital.

Through all of this, and his lengthy existential conversations with physics professor, Chesley Keeping, Owen comes to doubt the nature of everything around him — all that stuff most of us like to call “reality.”

Atomic Storybook is a new novel from the author of Spat the Dummy. It’s about the early years of Albert Einstein, an explosion on the moon, and a group of friends who feel like they are living in a long, strange dream. A delightful stew of lust, blood, ennui and physics, Atomic Storybook is also about living and dying in what is, undeniably, an illusion.

“Macdonald does an excellent job through multiple perspectives of keeping the reader on edge as to what is real and what is not. … It’s a barometer of excellent writing when a novel can get you to stop reading, causing you to daydream and get lost in one magnificently imagined scene.” (The Winnipeg Review)

"The humour in Spat was dark, bloody, and laugh-out-loud funny and Storybook is even better. It is also a more thoughtful and emotionally nuanced book and makes the reader experience Macdonald’s stated goal as an author to 'feel the shock of the future as it splashes over me like a bucket of ice water on a sunburn.' " (Cape Breton Post)

“This novel is unforgettable both for its subject matter and its form of narration. The style is electrifying and there are images that will burn in the reader’s mind forever. Ed Macdonald is a gripping writer.” (Alistair MacLeod, author of No Great Mischief, winner of the IMPAC Dublin Literary Award)

Ed Macdonald is an actor, playwright, and novelist. As an actor, he has appeared on various stages and in TV shows, including Trailer Park Boys, Lexx, and Hatching Matching and Dispatching. He was frequently a guest on Open Book with Mary Walsh. His first on-camera role was in Daniel Petrie's The Bay Boy. His first novel, Spat the Dummy, was published by Anvil Press in 2010.

His play Gemini opened at the 78th Street Theatre Lab and received great reviews, including a rave from the Village Voice. The play was then re-mounted by NBC for a run in their PSNBC space. Mutant Sex Party, The Escape Artist, Erratica, Hot Meat, and Titus Lucretius Carus have all been produced by the New York production house The Drilling Company. Titus Lucretius Carus was recently nominated for the New York Innovative Theatre Award. Born and raised in Cape Breton Island, Ed now lives in Toronto.

Other titles by Ed Macdonald

Books whose presences are "reassuring, like having a lamp in the window."