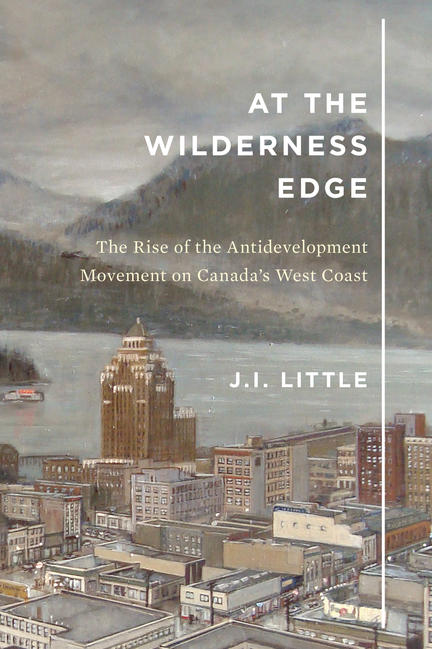 Vancouver prides itself on being a green city, and the west coast is known for its active environmental protest culture. But the roots of this mentality reach far beyond the founding of organizations such as Greenpeace. Small campaigns led by local community groups from the 1960s onward left a lasting impact on the region.

At the Wilderness Edge examines five antidevelopment campaigns in and around Vancouver that reflected a dramatic decline in public support for large-scale commercial and industrial projects. J.I. Little describes the highly effective protests that were instrumental in preserving threatened green spaces on Coal Harbour, Hollyburn Ridge, Bowen Island, Gambier Island, and the Squamish estuary, keeping these important British Columbia landmarks from becoming a high-rise development project, a downhill ski resort, a suburban housing tract, an open-pit copper mine, and a major coal port, respectively. Through detailed analysis of development proposals and protests, government studies, and community responses, Little argues that it was not the usual suspects – 1960s radicalism and anti-establishment youth culture – that initiated and carried out these protests, but rather middle-aged, middle-class, politically engaged citizens, many of whom were women.

An engaging study of grassroots politics in action, At the Wilderness Edge sheds new light on the rise of environmental consciousness, a pivotal era in the history of British Columbia, the Pacific Northwest, and Canada.

J.I. Little is a professor in the Department of History at Simon Fraser University, author of Loyalties in Conflict: A Canadian Borderland in War and Rebellion, 1812–1840, and co-author of An Illustrated History of Quebec: Tradition and Modernity.

Other titles by J.I. Little

Reading the Diaries of Henry Trent