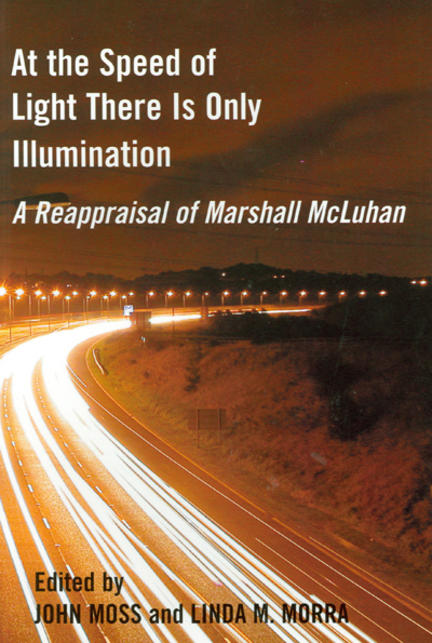 At the Speed of Light There is Only Illumination collects a dozen re-evaluative essays on Marshall McLuhan and his critical and theoretical legacy; from intellectual adventurer creating a complex architecture of ideas to cultural icon standing in line in Woody Allen’s Annie Hall. Given McLuhan’s prominent status in many academic disciplines, the contributors reflect a multi-disciplinary background. John Moss and Linda Morra chose the essays from a gathering of McLuhan’s academic devotees. The contribution – from “McLuhan as Medium” and “McLuhan in Space” to “What McLuhan Got Wrong” and “Trouble in the Global Village” – to provide a kaleidoscope of new views.  As Moss writes of the collected essays: “Some are big and some are small, some exegetic and some confessional, some stand as major statements and others are sidelong glances; some resonate with the concerns of public discourse and others are private or privileged or impious and provocative. Each consists of many parts, each a design on its own. They speak to each other…they may have come together as one version of what happened.”

John Moss writes mysteries because nothing brings life into focus like the murder of strangers. Elected a Fellow of the Royal Society of Canada in 2006 in recognition of his career as a professor of Canadian literature with over a score of books in his field, John moved progressively away from literary criticism to creative writing, before settling comfortably into the Quin and Morgan series which now occupies his writing efforts full time. He and his wife, Beverley Haun, whose book, Inventing â€˜Easter Islandâ€™, grew out of her work as a cultural theorist and their travel adventures as scuba divers, share a stone farmhouse with numerous ghosts in Peterborough, Ontario.

Jessica Schagerlâ??s research focuses on Canadian studies, drawing heavily on archival material; she is also invested in questions of professional concern, including mentoring and the futures of arts and humanities. She is the alumni and development officer for the Faculty of Arts and Humanities at the University of Western Ontario.

Other titles by John Moss

The Girl in a Coma

Other titles by Linda M. Morra

Untold Stories and Critical Approaches to History, Literature, and Identity in Canada

Dispatches from a Pandemic

Basements and Attics, Closets and Cyberspace

A Mingling of Contrarieties