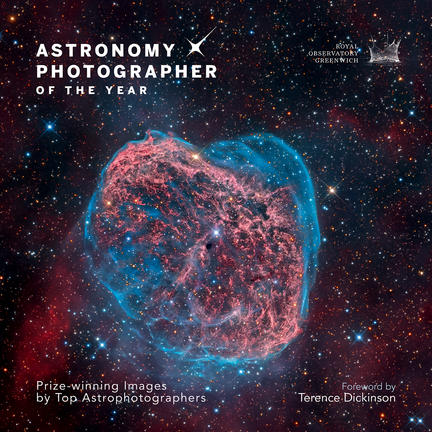 This stunning collection of images from the Astronomy Photographer of the Year competition assembles the very best astrophotography from around the world. Organized by the Royal Observatory, the photographs capture an astounding range of astronomical phenomena both within our solar system and far into deep space.

The book features four sections: Earth and Space, Our Solar System, Deep Space, and Overall Winners. The images are from the first six years of the competition (2009-2014), and include all the winners from each year along with a carefully curated selection from the shortlists. They are accompanied by notes from the judges and photographer, with background information and camera specifications.

From giant storm systems in Jupiter's atmosphere to the colorful, wispy remnants of a supernova explosion and the dazzling green curtain of the Northern Lights, Astronomy Photographer of the Year will appeal to both astrophotographers and beginners who simply enjoy gazing at the night sky.

If a picture is worth a thousand words, this collection of the prize-winning images of the Astronomy Photographer of the Year competition is worth at least 250,000. These extraordinary photographs of starscapes, planets, galaxies, and nebulas, as well as of Earth's night sky, celebrate the triumph of digital imaging technology and the artistic talent of amateur astrophotographers from around the world. Each photograph is supplemented with background information on its creator, the depicted astronomical phenomenon, the equipment used, and the judges' remarks. Thematically, images are arranged into three categories: "Earth and Space," "Our Solar System," and "Deep Space." These are followed by a selection of the winners from the past six years of the competition, organized by the Royal Observatory, Greenwich, and run in association with BBC's Sky at Night magazine. Large and beautifully designed, the book should appeal to astronomy aficionados as well as readers with more casual interest. Its visual language knows no boundaries. The images open the door for readers' imaginations, offering views into the unchartered territory of human creativity that has emerged in the new era of astrophotography, which Terence Dickinson (The Backyard Astronomer's Guide) describes in his foreword as "the golden age of astronomical imagery."

(starred review) The Astronomy Photographer of the Year competition receives entries from amateur astronomers around the world. The best proposals of the competition's first six years (2009-14) have been compiled in this beautiful book. The photographs are arranged into four categories: Earth and space, our solar system, deep space, and young astronomy photographer of the year. Each includes the winner, runner-up, and three highly commended submissions; the overall winner is then chosen from the top contender of each category and featured at the end of the book. Throughout the volume are spectacular cosmic images in fine detail and brilliant colors, such as the Milky Way, the Northern Lights, planets, galaxies, and nebulae. In addition, each photo is accompanied by the comments of the artist and the judges, information on the type of equipment used to obtain the shot, and background about the captured object. This book also features a guide to astrophotography, which includes techniques on taking photos with a telescope, using DSLR (digital single-lens reflex) lenses to take long exposures, and selecting the best digital photo imaging software. Recommended strongly for anyone with an interest in astronomy or photography, this work would also make for a terrific coffee-table book.

When the front cover of the book states, "Prizewinning images from top astrophotographers," they are not kidding. These are some of the most spectacular photographs you will ever see of the night sky. Of course the human eye even looking heavenward at night, could not view anywhere near what we are shown throughout the book. The Royal Observatory in Greenwich has organized the photos in partnership with BBC at Night magazine. The photos are taken from the best short-listed images from the past six years from the Photographer of the Year competition. But what may be even more impressive is that many of the images here of the moon, the stars and distant galaxies have been taken by teenagers as young as fourteen and fifteen. That is as interesting as the photos themselves. Some of the images look so lifelike, it is as if they had been painted or photoshopped but this was not the case. The type of cameras used are noted, along with lens, and shutter speed. Some of the photos have been taken through a telescope, namely those that offer out of this world (literally) shots of nebula and very deep space. The book is divided into three sections: Earth and Space, Our Solar System, and Deep Space. Every photo will elicit awe from the viewer, such as a solstice moon over Sounion in Greece, or a photo called Whisper of the Wind from Canada where the Northern and Southern Lights leave people speechless often. Of course the shots from millions of light years away seem the most amazing. The detail of the various Nebula take the reader right into the photos. Books like this one seem to make the universe seem a little smaller thanks to some photographers who had the whole night world in their hands.

From star trails and the aurora borealis to nebulae and immensely distant galaxies, this volume contains stunning imagery of planets, stars and formations familiar and unknown, along with background and technical information.

Other titles by Terence Dickinson

Our Eye on the Universe