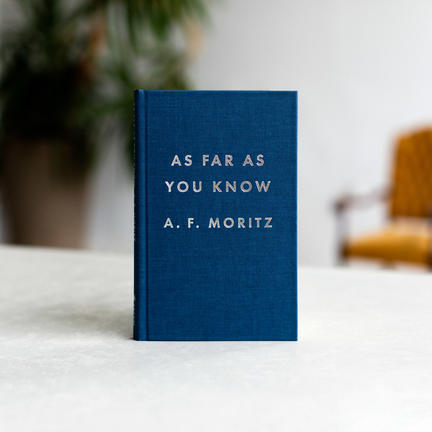 From one of the defining poets of his generation, a new collection that plumbs the depth of beauty, history, responsibility, and love. This specially designed and bound hardcover First Edition of A. F. Moritz's poetry collection As Far As You Know is limited to 40 copies.

As Far As You Know, acclaimed poet A. F. Moritz’s twentieth collection of poems, begins with two sections entitled “Terrorism” and “Poetry.” The book unfolds in six movements, yet it revolves around and agonizes over the struggle between these two catalyzing concepts, in all the forms they might take, eventually arguing they are the unavoidable conditions and quandaries of human life.

Written and organized chronologically around before and after the poet’s serious illness and heart surgery in 2014, these gorgeously unguarded poems plumb and deepen the reader’s understanding of Moritz’s primary and ongoing obsessions: beauty, impermanence, history, social conscience and responsibility, and, always and most urgently, love. For all its necessary engagement with worry, sorrow, and fragility, As Far As You Know sings a final insistent chorus to what it loves: “You will live.”