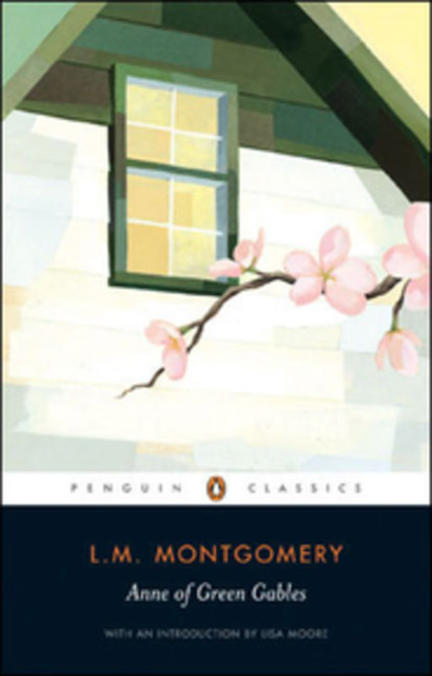 With an introduction by LISA MOORE.

This heartwarming story has drawn generations of readers into the world of Green Gables.

Anne Shirley is a skinny redhead who never stops talking. The Cuthberts, who meant to adopt a boy to help on the farm, are both exasperated and entertained by Anne’s constant chatter and romantic imagination, and don’t know what to make of her. But they soon find it hard to remember what Green Gables was like without Anne Shirley.

A much loved Canadian classic, L.M. Montgomery’s Anne of Green Gables has sold millions of copies since it was first published in 1908 and has been translated into many other languages.

Lucy Maud Montgomery was born in Clifton (now New London), Prince Edward Island, in 1874. After the death of her mother in 1876, Montgomery was raised by her maternal grandparents in the nearby community of Cavendish. She received a teaching certificate in 1894, and studied literature at Dalhousie University in Halifax, Nova Scotia, in 1895. After a brief career as a teacher at various island schools, she moved back to Cavendish in 1898. In 1911, she married the Reverend Ewan Macdonald and moved to Leaskdale, Ontario, where Macdonald was minister in the Presbyterian Church. A prolific writer, she published a number of short stories, poems, and novels, but is best known for Anne of Green Gables and its sequels: Anne of Avonlea, Anne of the Island, Anne of Windy Poplars, Anne's House of Dreams, Anne of Ingleside, Rainbow Valley, and Rilla Of Ingleside. Montgomery died in Toronto in 1942 and was buried in her beloved Cavendish, Prince Edward Island.

Lisa Moore is the acclaimed author of the novels Caught, February, and Alligator. Caught was a finalist for the Rogers Writers’ Trust Fiction Prize and the Scotiabank Giller Prize and is now a major CBC television series starring Allan Hawco. February won CBC’s Canada Reads competition, was longlisted for the Man Booker Prize, and was named a New Yorker Best Book of the Year and a Globe and Mail Top 100 Book. Alligator was a finalist for the Scotia Bank Giller Prize, won the Commonwealth Writers’ Prize (Canada and the Caribbean region), and was a national bestseller. Her story collection Open was a finalist for the Scotia Bank Giller Prize and a national bestseller. Her most recent work is a collection of short stories called Something for Everyone. Lisa lives in St. John’s, Newfoundland.

How did I miss this while growing up?

Somehow I have made it to my early 30s and never read Anne of Green Gables until this year. The perfect reason to pick up this book was the Canadian Reading Challenge that I signed up for in July. I finally had the best excuse to pick it up and when I saw the audio book at my library, I knew this was the perfect way to approach this book. I think my experience with this story was a favourable one as I truly enjoyed listening to the story instead of reading it for myself.

Anne is quite the little chatterbox right off the hop and quiet, shy Matthew Cuthbert is at a loss of what to do with her when he realizes they've sent a little orphan girl instead of the boy he and his sister, Marilla, had requested. Matthew brings poor little Anne home with him for the night and leaves it to Marilla to deal with the dirty work of explaining the predicament to Anne. I think that I just about melted when Marilla decides to keep Anne after almost sending her back.

“I've just been imagining that it was really me you wanted after all and that I was to stay here for ever and ever. It was a great comfort while it lasted. But the worst of imagining things is that the time comes when you have to stop and that hurts.”

Anne talks an awful lot and at first I thought it would drive Marilla and Matthew crazy, but they both seem to enjoy her company and show it in different ways. Matthew enjoys having a little girl around that he can dote on and spoil with dresses and candies. And Marilla enjoys the challenge of teaching Anne the proper way to run a household and becoming a well brought up young lady.

I found that Anne needed them as much as they really needed her. Marilla is the kind of woman who acts all hoity-toity, but deep down she really is a caring person and has quite the sense of humour. Anne's imagination sure does infuriate Marilla, but sometimes Marilla comes to embrace Anne's ability to daydream and think of things in different light. I think that Anne coming to Green Gables actually changed Marilla the most and made her a better and more amiable person. And Matthew is undeniably shy, yet completely devoted to Anne.

I love everything about Anne: her imagination, her way with words, how she makes friends with kindred spirits, the way she says exactly what is on her mind and of course her ability to find trouble everywhere. She has a childlike sense of wonder and also the thoughtfulness of an old soul which make for some of the best quotes:

“You'd find it easier to be bad than good if you had red hair," said Anne reproachfully. "People who haven't red hair don't know what trouble is.”

“It's been my experience that you can nearly always enjoy things if you make up your mind firmly that you will.”

So I have decided that I have a soft spot for this book and the three main characters of Anne, Marilla and Matthew. I've grown to love them even and am thinking about continuing with the Anne of Green Gables Series to find out what other adventures Anne stumble into.

An experience of love

I love Anne.
When I was a child I loved her so much.
I made my mom go to PEI to do "Anne days" with me.
It is just such a classic and has so many good feelings.
Well written and a beautiful story.

Other titles by Lucy Maud Montgomery

Tales of Home and Family

How L.M. Montgomery Shaped a Classic

Anne of the Island (Vol3)

Other titles by Lisa Moore

New Writing Made in Newfoundland

This Is How We Love

How a Mega Dam Became a Predatory Formation

Recipes to Renew Governance in Newfoundland and Labrador

Titles that provide a little levity.