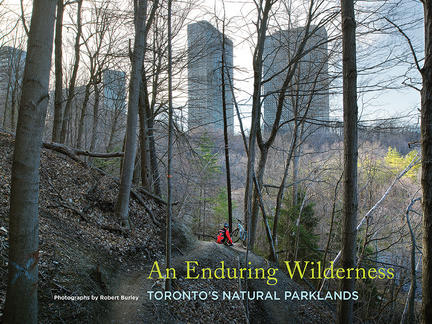 In a city sometimes referred to as “The Big Smoke,” Toronto’s extensive network of sunken rivers, forested vales, and expansive shoreline has been too often overlooked, neglected, or forgotten. However, the last 25 years has seen these distinctive landscapes rediscovered and even embraced as great civic spaces. Commissioned by the City of Toronto to chronicle the wonders of these wilderness parks, renowned photographer Robert Burley looks at these sites as integral parts of urban life, from breathtaking lake views of the Scarborough Bluffs to glimpses of the densely wooded trails in the Carolinian forests of Rouge Park, Canada’s first and only urban national park.

Burley’s photos are augmented with selections of poetry and prose by some of Toronto’s best-known writers, including Anne Michaels, George Elliott Clarke, Alissa York, and Michael Mitchell. A historical essay and an appendix highlight the history, the biodiversity, and the priceless cultural value of these urban parklands. Though confined to the city limits, An Enduring Wilderness is full of surprising ecological and urban discoveries that know no limits themselves.

As an artist working in photography, Robert Burley in his work often explores the transition between city and country. He’s completed a number of long-term projects that investigate the presence of nature in an urban setting, including; Viewing Olmsted: Photographs by Robert Burley, Lee Friedlander & Geoffrey James (MIT Press 1996) and An Enduring Wilderness: Toronto’s Natural Parklands (ECW Press 2017). His photographs have been widely exhibited and can be found in numerous museum collections around the globe. Robert lives in Toronto with his family, teaches at Ryerson University’s School of Image Arts, and is represented by the Stephen Bulger Gallery.

“Your imagination will soar in this illuminating and inspiring work. In this highly personal collaborative effort between novelists, poets, and a photographer, seasonality, continuity, change, and continuous movement are seamlessly melded into one harmonic effort that forces you to reconsider what a park is, and in doing so will forever change the way you see the city that you thought you knew.” — Charles A. Birnbaum, FASLA, FAAR, President & CEO, The Cultural Landscape Foundation

“With three-quarters of Canadians now living in cities, I'm glad that our city planners, municipal politicians, and the public are paying attention to the protection and sound management of urban green space, like Toronto's world-class ravine system. Urban green spaces complement traditional infrastructure, provide a multitude of ecological benefits, and contribute to the health and well-being of local residents.” — David Suzuki

“While it would seem at first to be only of local interest to those living in and around Toronto, the photos themselves are gorgeous and the conditions they document are nearly universal for other North American cities: scenes of natural, remnant ecosystems butting up against, but nonetheless resisting, the brute force of urban development.” — BLDGBLOG

“Burley's photos of all of it are stunning and will surprise some people: this is Toronto? . . . Big full colour photo books like this are expensive to produce and time-consuming efforts, but An Enduring Wilderness reveals a Toronto you'll want to know better.” — Toronto Star

“The photos that comprise An Enduring Wilderness: Toronto's Natural Parklands, which is both a book and a photo show, offer a delicate portrait of the city that we surely don't see enough, even as we're quick to offer platitudes about how lovely our ravine system is.” — BlogTO

Other titles by Robert Burley

The Origins and Ecology of Toronto's Tommy Thompson Park

Photography at the End of the Analog Era