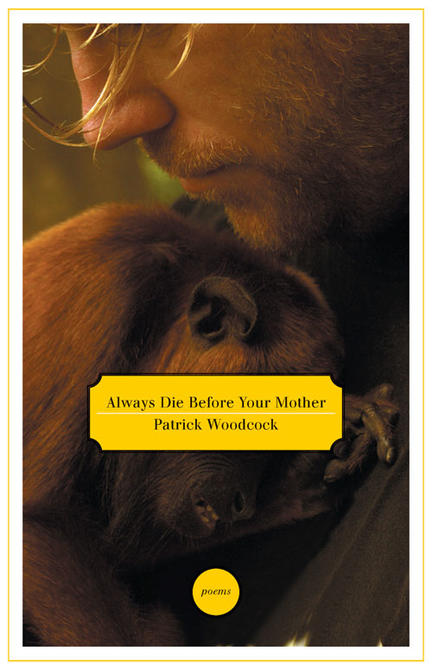 Like an embedded journalist, Patrick Woodcock writes his poetry from the front lines of experience.

From cities reeling from the trauma of siege warfare to the stifling heat and politics of the Arabian Peninsula to the darkest corners of the South American rain forest, Woodcock's poems bear witness to a world that is equally immediate and remote... and far more complex than we often imagine.

In his new book Always Die Before You Mother, Woodcock takes us around the globe — recording whatever he can. Like a photographer using the changeable lenses of image and idiom, he transforms all that he sees into a searing commentary on human failures both public and private, those of our societies, our politics and our religions, as well as his own failures as a son.

Patrick Woodcock is the author of six books of poetry. He was the poetry editor for the Literary Review of Canada and has had numerous poems published over the last year in countries such as Canada, the U.S., England, India and Colombia. Because travel is so essential to his writing he has lived everywhere from Iceland to Russia, Bosnia and Herzegovina to Oman and Saudi Arabia. He currently lives in the Amazon in Colombia and Oakville, Ontario. Most of the poems in this book were read at The 18th International Poetry Festival of Medellin in July 2008.

“With an astounding breadth of vision, Canadian author Patrick Woodcock's latest release, Always Die Before Your Mother, offers a travelogue of verses from locations around the world that could only have been written in our time. . . . From locations as far-flung as the turbulent Arabian Peninsula to the rain forests of South American, he sends copy which provides soul-filled and heart-wrenching accounts of life outside the bubble of our everyday lives.” — Scene Magazine

“Death and mourning give focus to the notoriously tricky subject of travel writing as the poet has crafted a detailed compendium of how death is spoken of around the world.” — Eye Weekly

“‘Please, mother’ he writes, ‘let one of the dolphins circling me be you./ Just exist with me here.’ It is a poignant and a moving plea, and is, in fact, what Woodcock as poet does with the people and the places he presents in this collection: He exists, briefly, poetically, with them. In so doing, he bears witness to their struggles and finds perspective on his own.” — Globe and Mail

“Some of the poems, such as ‘Dogs Fashioned Out of Rust,’ evoke the rhythms and spirituality of T.S. Eliot — that is, if the unadventurous, expat American had ever been brave enough to roam the world as a war correspondent . . . Many of the poems strike like grenades, and after awhile you become afraid — in a good way — to read them, wary of what vision of violence and destruction might lie ahead.” — Vue Weekly

“Woodcock exhibits a feel for both closed and open forms and mixes them effectively. He also makes good use of recurring themes and builds a layered structure that is neither obvious nor, in the end, obtuse. It's a heavy book for sure, but so good and heartfelt that it's well worth the trip.” — Broken Pencil

Other titles by Patrick Woodcock

You can’t bury them all