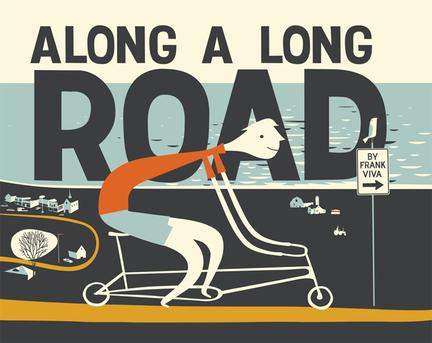 Follow that road! Speed off on an eventful bicycle ride along the bold yellow road that cuts through town, by the sea and through the country. Ride up and around, along and through, out and down. Frank’s striking graphic style is executed in just five joyous colours and his spare, rhythmic language is infectious. Hit a bump? Get back on track! Reach the end? Start again.

FRANK VIVA is managing director and founding partner of Viva & CO., an independent branding and design agency that has created award-winning work for companies such as Le Creuset, MoMA, and Butterfield & Robinson. He is a frequent cover artist for

magazine and his first book,

, was a bestseller and a

, was the first picture book ever created for The Museum of Modern Art’s publications department and was translated into seven languages. He lives in Toronto with his family.

It’s not about the destination — it’s all about the journey in this captivating story of a man on his bicycle. We follow him as he rides up hills and down, into tunnels and out, over bridges and along city streets. Going fast, going slow, he grinds to a sudden stop, then he’s off again, his posture shifting as the terrain changes.

The twisty-turny road takes him past fields, towns, amusement parks and seasides. And the passing landscape holds all sorts of surprises. Is that a whale or a person spouting water in the ocean? Is that someone sitting on top of a goalpost in a faraway sports field? How many different kinds of boats and vehicles can you spot?

Readers will not be able to resist touching the shiny, caramelcoloured road that runs (in raised ink) across every page in this book. The artwork was, in fact, originally created as a single, continuous, 35-foot-long panel, and its sense of forward motion is very much alive on these pages.

The minimalist text moves the story along, featuring lots of opposites, word play (“Along a long road”… “Around a round bend”…), some counting and plenty of repetition to encourage word recognition in pre-readers.

Artist Frank Viva’s award-winning work has appeared, among other places, on the cover of The New Yorker magazine. His sleek, stylized illustrations and a muted colour scheme give this book an unusual vintage look that may not appeal to everyone, but those who delve into its pages will not be unrewarded.

Along a Long Road gives young readers an opportunity to broaden their visual literacy while furthering their reading skills.

Other titles by Frank Viva

A Trip To the Top of the Volcano with Mouse

A Trip to the Bottom of the World with Mouse

Slowing Down to See the World

50 Years of Biking and Walking with Butterfield & Robinson

Outstanding in the Rain

A Long Way Away