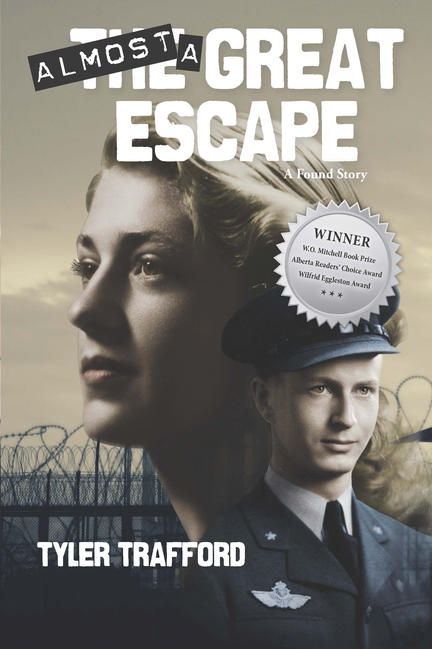 Winner of the W.O. Mitchell Award, the Wilfrid Eggleston Award for Non-Fiction, and the Alberta Readers' Choice Award

Following his mother's death in 2004, Tyler Trafford discovers an album of old letters and creased photographs that reveal a mother he never knew, a man he's never heard of, and a love affair doomed by class and circumstance. The letters are from Jens Müller, a Norwegian pilot who trained in Canada during the early days of World War II, one of only three prisoners who would make it home after The Great Escape.

In Almost a Great Escape, Trafford takes us on a journey of emotional discovery and dramatic disclosure as he reconstructs his mother's life, from her youth as a wealthy Montreal debutante to her final days as a broken but unbent casualty of a loveless marriage. His search for answers takes him across Canada and then across the ocean to Norway, hoping to learn more about the mystery of this secret relationship. Written with a fluidity fueled by heart-wrenching honesty, Trafford's unconventional memoir confirms that while you can survive your past, you can never escape from it.

Almost a Great Escape includes photographs as well as excerpts and reproductions of telegrams and letters Jens sent from England and Stalag Luft III.

Tyler Trafford worked for many years as a reporter and editor first with the Calgary Herald, then in Australia with the Australian and later with the Fort Lauderdale Sun-Sentinel. When he returned to Canada, he began writing biographies, histories, and works of fiction, including The Story of Blue Eye, which was shortlisted for the 2005 Grant McEwan Author's Award. He now divides his time between Calgary and his studio on the Oldman River near Pincher Creek, Alberta.

"Trafford is a mesmerizing writer with a style all his own.... The story of a secret love affair, it is a wonderfully twisted story of a Westmount upper class family, romance in war, and the scars that come from not taking a chance on love."

"Tyler Trafford exposes an elaborately intertwined story of family, romance, war, and love's aftermath. His multi-genre approach is both lyrical and admirably adapted to the challenge of the story he both unearths and illuminates."

"Tyler Trafford uses his creative ingenuity to bring the story of his late mother's secret love to life. Told with great flair and extraordinary skill, this captivating tale is an engrossing voyage of discovery and revelation."

"This is not a sentimental love story. It belongs in another, higher category. It's one that people of both sexes and any age past puberty will appreciate. And incidentally, it's a fine piece of writing and composing."

"Letters in love and war reveal the most about the human condition. Tyler Trafford takes us inside a wartime romance, situates it at the heart of the most celebrated escape of the Second World War, and delivers a moving account of his own search to understand a parent and his own condition."

"As his own reflections intermingle with Alice's letters, the book becomes a moving story of love between a mother who dreamed of being a writer and a son who became one."

"There are a handful of characters in a reader's life that are real, their wakes resonating like ghosts. Such is Alice Tyler, conjured by her son, writer Tyler Trafford, in his epistolary biography, Almost a Great Escape. She is so evoked you will taste her in a glass of vodka.... Trafford's writing swims with the heady heat of a slow, balmy, never-ending childhood summer. He builds towers with his words, stacking adjectives to describe the slow-motion escape of a lovesick war hero and building to a satisfying, thought-provoking conclusion."

Other titles by Tyler Trafford

The Story of Blue Eye

Sun on the Mountains, Book 1