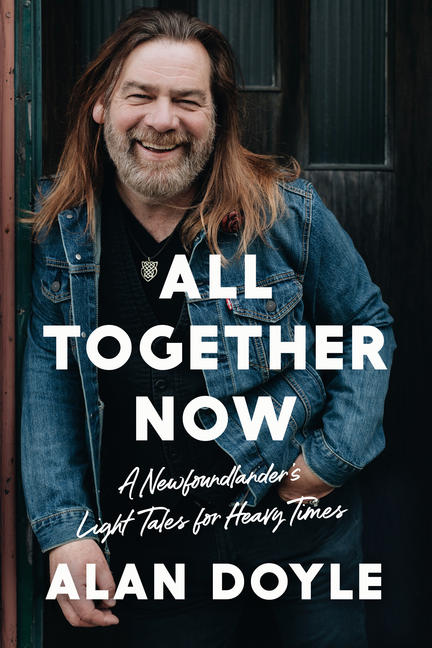 National Bestseller
One of Newfoundland's funniest and most beloved storytellers offers his cure for the Covid blues.

Is there a more sociable province than Newfoundland and Labrador? Or anywhere in Canada with a greater reputation for coming to the rescue of those in need?

At this time of Covid, singer, songwriter and bestselling author Alan Doyle is feeling everyone's pain. Off the road and spending more days at home than he has since he was a child hawking cod tongues on the wharfs of Petty Harbour, he misses the crowds and companionship of performing across the country and beyond. But most of all he misses the cheery clamour of pubs in his hometown, where one yarn follows another so quickly "you have to be as ready as an Olympian at the start line to get your tale in before someone is well into theirs already." We're all experiencing our own version of that deprivation, and Alan, one of Newfoundland's finest storytellers, wants to offer a little balm.

All Together Now is a gathering in book form--a virtual Newfoundland pub. There are adventures in foreign lands, including an apparently filthy singalong in Polish (well, he would have sung along if he'd understood the language), a real-life ghost story involving an elderly neighbour, a red convertible and a clown horn, a potted history of his social drinking, and heartwarming reminiscences from another past world, childhood--all designed to put a smile on the faces of the isolated-addled.

Alan Doyle has never been in better form--nor more welcome. As he says about this troubling time: "We get through it. We do what has to be done. Then, we celebrate. With the best of them."

ALAN DOYLE is a Canadian musician, actor and writer. His albums as a solo artist and as front man for the Newfoundland Celtic-rock band Great Big Sea have sold over a million copies, and he has starred in such features as Ridley Scott's Robin Hood and CBC's Republic of Doyle. He has written two books, Where I Belong, published in 2014, and A Newfoundlander in Canada, published in 2017, both of which were national bestsellers. Alan lives in St. John's, Newfoundland.

Other titles by Alan Doyle

A Newfoundlander in Canada